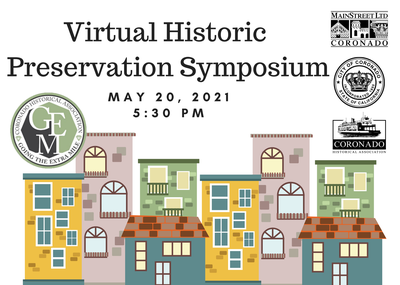 May is National Preservation Month. Communities all around the country are celebrating their unique heritage. Join the Historical Association, the City of Coronado, and Coronado MainStreet in celebrating preservation in Coronado! This year's free Historic Preservation Symposium will be held virtually.

There are two ways to watch this year's Preservation Symposium:

Coronado native Scott Keyes, who now serves as the Chief of the Heritage Documentation Programs at the National Park Service, will be presenting on national historic preservation efforts, including the documentation of the country's historic properties. In addition, associate Planner Tricia Olsen will be describing the City’s Historic Resource Ordinance and the process to apply for Historic Designation and Mills Act tax incentives.

The Symposium will include the special announcement of the winner of the 2021 GEM award. The GEM—Going the Extra Mile—is an award that recognizes a homeowner’s commitment to preserve and restore, rather than replace, a historic home, contributing to Coronado’s unique and architecturally rich built environment. Read more about the nominees here. 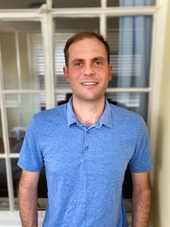 Prior to joining the National Park Service, Scott served as the Department of the Navy’s chief technical expert on architectural history and historic preservation.  He also previously worked as a historic architect at Joint Base Pearl Harbor-Hickam and as a designer at various architectural firms in Canada and the United Kingdom.

A Secretary of the Interior-qualified historian and architect, he received his Bachelor of Arts in History from UCLA and Master of Architecture from the University of Toronto. Though currently living in Washington DC, Scott grew up in Coronado and graduated from Coronado High School.

Tricia has over 15 years of experience in the field of Historic Preservation in the San Diego region. She holds dual Bachelor’s degrees in History and Architectural History from the University of California at Santa Barbara, a Master of City Planning degree from San Diego State University, and is certified as a Professional Planner by the American Planning Association’s Institute of Certified Planners.  She has worked as a historic research consultant, as a Historic Preservation Planner for the Cities of San Diego and Coronado, and currently manages the City of Coronado’s Historic Preservation and Mills Act program.