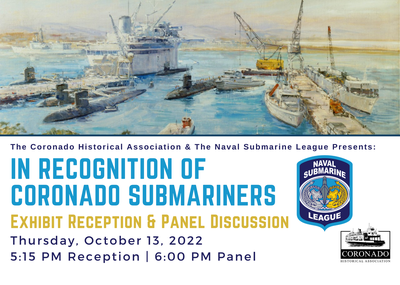 The Coronado Historical Association, in partnership with the Naval Submarine League, presents In Recognition of Coronado Submarines: Exhibit Reception & Panel Discussion. We invite you to join us for a special opening reception of the CHA's latest exhibit, A View from the Periscope, followed by a panel discussion and sharing of sea stories from local submariners. The program will include remarks from special guest Captain Kenneth Douglas, Commander, Submarine Squadron Eleven, who will give a brief update on current Naval submarine operations.

Doors open for the reception at 5:15 pm and will include wine and refreshments provided by the Naval Submarine League. Program to follow starting at 6:00 pm.

Important Registration Information: Attendance is restricted to fully vaccinated persons with a booster shot. Capacity is limited and reservations are required. No walk-ins will be admitted. If you have any questions please email info@coronadohistory.org or call (619) 435-7242.

Captain Ward grew up in Coronado, graduated from the U.S. Naval Academy in 1960 and completed his military service in 1987. He served in several submarines, including USS Halibut (SSGN 587); USS Skate (SSN 578), and USS Hammerhead (SSN 663).  He commanded USS Archerfish (SSN 678), Submarine Development Squadron 12, and Naval Submarine School. Captain Ward was awarded the Legion of Merit (6), the Meritorious Service Medal (2), and several lessor awards. He has lived in Coronado since 1999. He attends Christ Church in Coronado and is a member of the Naval Submarine League.

Retired Navy Captain Jeff Fischbeck, a 1971 graduate of Colgate University, served his thirty-year naval career onboard five nuclear submarines, including USS GREENLING (SSN 614), USS HENRY CLAY (SSBN 625), USS LAPON (SSN 661), and USS POGY (SSN 647). He commanded USS LA JOLLA (SSN 701), homeported in San Diego from 1988 to 1991. His other San Diego tours included Deputy Submarine Squadron Commander (1991-1992) and Director of the Navy’s Arctic Submarine Laboratory (1998-2002).  Shore tours included command of the NROTC at Carnegie Mellon University and University of Pittsburgh, and submarine billets in Naples, Italy, and Brussels, Belgium.  Personal awards include the Defense Superior Service Medal, Legion of Merit, Meritorious Service Medal, among other personal and unit awards.  After retiring from the Navy, he worked as a senior consultant for the Department of Homeland Security, and served as President of the Pacific Southwest Chapter of the Naval Submarine League and the Optimist Club of Point Loma.

Born and raised in Ridgewood, New Jersey, MacVean received his commission through the NROTC Program at Dartmouth College.  Following assignment to the USS FORREST SHERMAN (DD-931), the Navy sent him to Cornell University where he earned a Ph.D. in Nuclear Science and Engineering.  He entered the Navy Nuclear Power Program.  MacVean’s sixteen years of sea duty included 4.5 years underwater and qualification in submarines on the USS TINOSA (SSN-606), where he was the Navigator.  Following TINOSA, he was the Navigator on USS GEORGE WASHINGTON (SSBN-598).  After a shore tour with the Secretary of Defense, he was the commissioning Executive Officer on USS PARCHE (SSN-683).  MacVean commanded SEAWOLF (SSN-575) during the midst of the Cold War and then commanded SUBMARINE DEVELOPMENT GROUP ONE here in San Diego.  Captain MacVean was awarded two Distinguished Service Medals and a Legion of Merit among other awards.  After the Navy, he provided executive-level leadership for two companies providing advanced technology hardware and software to the Navy and Marine Corps.  He also served on the Board of Trustees for the San Diego Maritime Museum and the Cabrillo National Monument Foundation, while remaining active in the Naval Submarine League.

Captain William Green entered the Navy after completing NROTC through the University of Southern California in 1952. The culmination of Captain Green's submarine duty was as commander of the USS Tunny (APSS-282), which was specially configured to conduct unconventional warfare in Vietnam. While in command, he was awarded the Bronze Star with Combat V and two Navy Commendation Medals with Combat V. Green, an intelligence sub-specialist, also served in many intelligence assignments including assistant naval attaché in Moscow, USSR (1969-1971), defense attaché in Rome, Italy (1976-1979), and was an analyst at the National Security Agency. He retired from the Navy in 1983.

Captain Douglas hails from Long Island, NY and enlisted in the Navy in 1993.  Following Nuclear Power training, he was selected for an appointment to the U.S. Naval Academy.  He graduated with merit in 1998 with a major in Aerospace Engineering. His afloat tours include the submarines USS MICHIGAN, USS BREMERTON, USS CHEYENNE and Executive Officer of USS ASHEVILLE.  He commanded USS PASADENA (SSN 752) from July 2015 until October 2017 where the ship was awarded the Submarine Squadron 11 Battle Efficiency award.  He has completed six strategic deterrent patrols as well as several deployments to the Western Pacific and South America. His assignments ashore have included an instructor tour at Tactical Training Group Pacific, Junior Board Member on the US Fleet Forces Command Nuclear Propulsion Examining Board, Special Assistant to the Commander of United States Strategic Command, Deputy Commander of Submarine Squadron ELEVEN and the Submarine Commanding Officer and Post-Commanding Officer detailer at Navy Personnel Command in Millington, TN. CAPT Douglas is a graduate of the Air Command and Staff College and the Joint Forces Staff College.  He holds a M.S. in Engineering Mechanics from Columbia University. His personnel awards include the Legion of Merit, Defense Meritorious Service Medal, Meritorious Service Medal, Navy and Marine Corps Commendation Medal, Navy and Marine Corps Achievement Medal, and various campaign and unit awards.