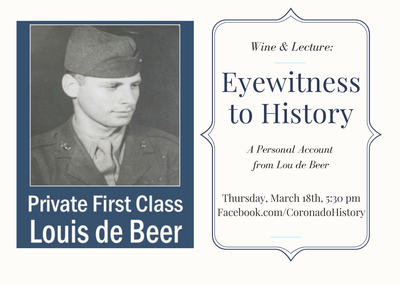 On Thursday, March 18 at 5:30 pm the Coronado Historical Association is honored to present this month's Wine & Lecture: Eyewitness to History - A Personal Account by Lou de Beer.

Mr. de Beer, an honoree on the Coronado Avenue of Heroes, will present his personal account of his WWII & Korean War experiences. Attendees will see period photographs and newsreel footage of the German occupation of the Netherlands, including de Beer's American family as hostages of the German government in concentration and internment camps in the Netherlands, Germany, and France. Mr. de Beer will also discuss his combat experience in the Marne Corps, during the Korean War.

Join us on Facebook Live or register beforehand using the form below.