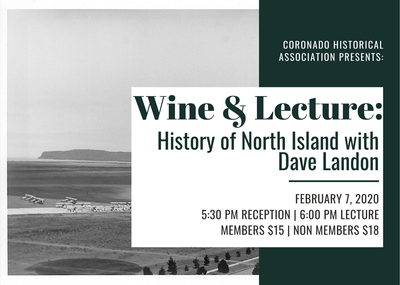 Join us for a night of wine & cheese as the Coronado Historical Associations own Board President and former CO of NASNI, Dave Landon, shares his knowledge on Coronado's Naval Air Station North Island.

The “Wine & Lecture: History of North Island with Dave Landon” will be held Friday, February 7th with a reception at  5:30 p.m. and the lecture beginning promptly at 6:00 pm. This will be an evening for adults to enjoy wine and cheese as President Landon shares his knowledge. Tickets can be purchased online at www.coronadohistory.org, at the Museum Store, or by calling (619) 435-7242.

David, a native of Guilford, Connecticut, graduated from the University of New Hampshire in 1975 with a BS in Business Administration. He entered the U.S. Navy in 1976 and retired as a Captain in 2006 after 30 years on active duty. He has commanded HSL-­51 in Atsugi Japan, HSL-­41 in San Diego California, Fleet Area Control and Surveillance Facility in San Diego and Naval Base Coronado, which included NAS North Island, Naval Amphibious Base Coronado, NALF San Clemente Island, the Silver Strand Training Complex, La Posta Mountain Warfare Training Complex and OLF Imperial Beach. Since retiring from the Navy, David has worked as the Chief Operating Officer and co-­owner of Priority Solutions, a permanent placement- ­recruiting firm and as a Program Manager and leadership advisor for Scientific Applications International Corporation (SAIC). He assumed the position of President and Chief Executive Officer of Systems Technology Incorporated (STI) in 2011 and retired from STI in DEC 2017.

We preserve and share Coronado's unique and wonderful history with intriguing exhibits and innovative programs for all ages.