Wine & Lecture: John J. Montgomery and the Quest for Flight 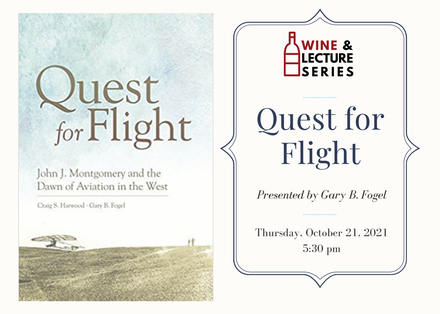 John J. Montgomery and the Quest for Flight

John J. Montgomery (1858-1911) was a pioneering aerodynamicist who spent considerable time understanding the basics of flight. He is best known for inventing gliders that were capable of flight as early as 1884 at Otay, and extending these to high-altitude designs by 1905 at Santa Clara, culminating in a glider in 1911 that was capable of both roll and pitch control in wing with no control surfaces in the tail. He is credited with arranging the first public flight of a heavier-than-air flying machine (an unpowered Montgomery glider) in the United States (1905). His story however includes both successes and failures. This lecture will help explain Montgomery’s biography and his relationship to other aviators. However, in the US, Montgomery is now remembered in the National Aviation Hall of Fame, and most recently in the International Aerospace Hall of Fame.