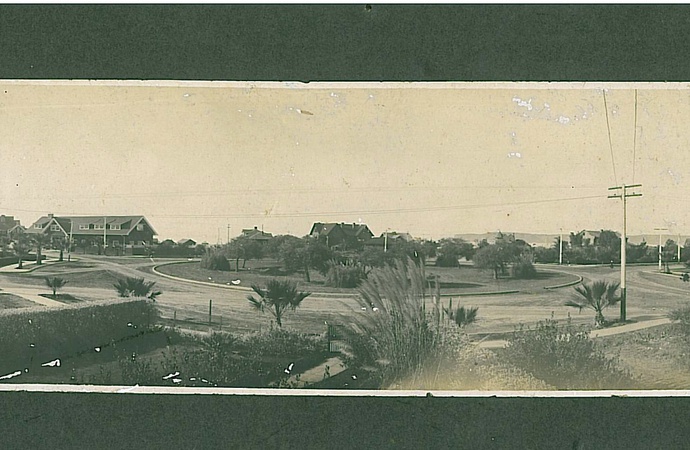 Located just off of Orange Avenue, Star Park circle provides a location for some of Coronado’s favorite traditions. The park was designed in 1886 as a part of the city’s original plans. Donated to the city by J.D. Spreckles, the park was originally named for the five streets that shoot out from the middle circle. In early photos, the park resembled a star. When Star Park was originally created, its hedges were trimmed in the shape of a star. Today, the city continues to enjoy the beautiful park. Aside from the wonderful scenery the park provides, it has also served an important purpose in Coronado’s history, as the location of the annual Memorial Day celebrations. The VFW had been conducting Memorial Day ceremonies at different locations throughout Coronado until they held their first official ceremony in Star Park in 1958. The Memorial Day ceremony has been held there ever since. The yearly service includes an hour-long salute, Presentation of the Colors, the playing of the National Anthem, and guest speakers. The park also honors Coronado’s fallen warriors in other ways. The most interesting landmarks in Star Park Circle are of course its trademark cannons. The two war cannons stand on the opposite sides of the park, one pointing east and the other west. The cannons were brought back from the Dominican Republic Rebellion of 1916 by General Joseph H. Pendleton. The historical plaques on one of the cannons describe it as a “Carriage-mounted cartridge-loaded Belgian Mitrailleuse, circa 1850,” and proclaims its name to be “Grapeshooter.” Between the two historical cannons, a memorial rock stands. The rock honors the fallen soldiers of Coronado with a list of their names.

Another annual event located at Star Park Circle is the annual car show, MotorCars on MainStreet. The event draws thousands of spectators, featuring hundreds of restored classic cars. Booths are set up with topics like car financing, mechanics, and car enthusiast clubs. Live music is played at Star Park. At the end of the event, awards are presented in Star Park for 16 different categories.

Another interesting piece of Star Park Circle’s history is its previous inhabitants. The quiet street with its beautiful scenery and proximity to Coronado Beach has been an attractive spot for living, drawing many residents - most notably, Lyman Frank Baum, author of The Wonderful Wizard of Oz and its sequels. While Baum lived in Chicago, he chose to spend his winters in Coronado, working on his novels in the quiet beach town. It is said that Coronado became Baum’s own Oz, his writing sanctuary. Historians have suggested that Baum wrote three sequels to the Wizard of Oz and four other books in Coronado. While it is uncertain how much the city influenced Baum’s writing, it is clear many of his experiences in Coronado worked their way into his stories. Baum even published a poem about Coronado in the San Diego Tribune, titled “Coronado: The Queen of Fairyland.” The house, located 1101 Star Park Circle, can still be viewed from the outside, drawing Wizard of Oz fans and history buffs alike. Today, from outside the house, one can see a welcome mat reading “Ding Dong...” under a pair of legs wearing striped tights and the famed Ruby-Red Slippers, referring to a scene in the story in the story where the Wicked Witch of the East is crushed by the protagonists’ flying house. One can also see a sign reading “Wizard of Oz Ave,” as well as framed pictures and posters regarding the Wizard of Oz. Other Wizard of Oz memorabilia decorates the visible front room. Star Park Circle is a Coronado location that both provides a pleasant location for local events and houses important pieces of Coronado’s history.