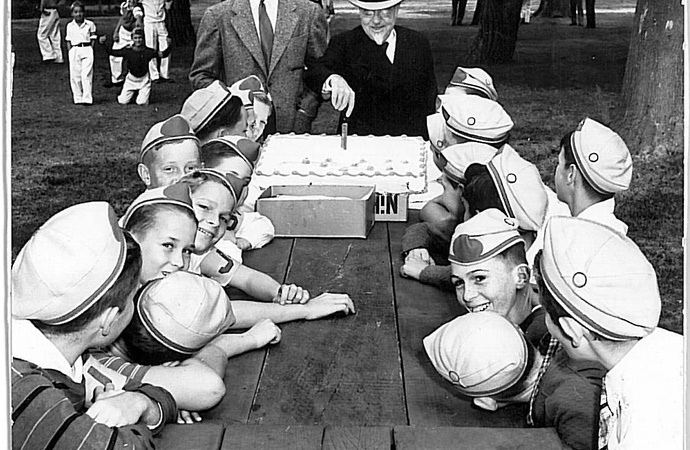 Spreckels Parks, named after one of Coronado’s forefathers, John D. Spreckels, was founded in 1927. A host of Coronado community events are held here including the Art in the Park, Coronado Flower Show, Concert in the Park & holiday celebrations. The Coronado Flower Show dates back to 1922 and Concert in the Park has been around since the summer of 1971. Spreckels Park once was known to Coronado citizens as East Plaza Park and West Plaza Park. The city’s two cross streets, Olive and Palm Avenue, used to extend and met in the center of West Plaza. In 1945 a new city hall was proposed to be added onto the park as a part of post war renovations. Only a small part of the Plaza would have been taken over for the actual building and the rest of the grounds maintained as a park but this renovation ultimately fell through. In 1964 a fountain was added to the park and a plaque was to be added to honor John D. Spreckels. This fountain went on to stand as a centerpiece in the cities annual flower show. The fountain was vandalized and removed in 1977, never getting the chance for the plaque to be added. The park once had an adobe hut in East Plaza and the survey benchmark for Coronado used to be located in the northeast corner of West Plaza. Spreckels Park’s deep history to this town can be observed just be strolling through and looking at the many plaques on benches, trees, the gazebo and flower patches.
Some of the people honored throughout the park include Ricky Fernandez, a Coronado citizen who worked hard for and within the Bridge & Bay Garden Club, the Coronado Flower Show, and the Crown Garden Club. You can also find CDR. Philip Henry Dennler, JR, a prominent figure within the Coronado Flower Show, as well as Carol C. Cahill, an active Coronado citizen who fought for things such as lights on the bridge, a Historical Ordinance for Coronado and much more. The park is made up of generations of memories and is engraved with the names of people who shaped our community.