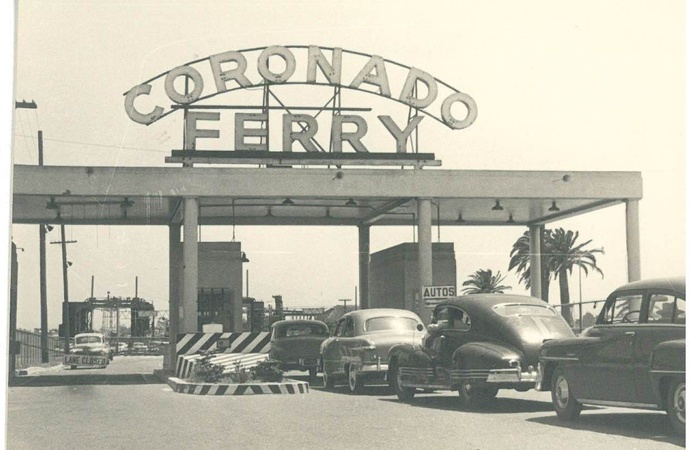 The Coronado Ferry Landing we know now is much different from the original in both location and the types of ferries in service. The first ferry boat was a steam-powered, side-paddle, and arrived at Coronado on August 19, 1886, appropriately named "The Coronado." At a cost of $15,000, the ferry could carry 600 people and 13 horse teams. While "The Coronado" was the first official ferry in service in the spring of 1886, forty workmen crowded onto the large barge towed behind a tiny steam yacht “Della”. The workmen had been assigned the task of clearing the sagebrush from Coronado and North Island under the direction of two pioneer developers, Elisha S. Babcock Jr. and H. L. Story, who were building a resort. “Della” was Story’s yacht and was only 21 feet long. The “Della” served until Aug. 19, 1886, when the first real ferry, Coronado, went into service. Some of the other notable ferries include the "San Diego" which was one of five boats during its service that ferried passengers and automobiles across the bay from San Diego to Coronado. The "San Diego" is now aground on the banks of the Sacramento River. There were repeated efforts to bring her back to San Diego to be retrofitted as a dinner boat, but no such success. "The Coronado" went to Argentina and served on the Amazon River. It is reported she is beached and abandoned somewhere there. Today, all but one of the car-carrying ferries survives — "The Crown City," built in 1954, that currently operates in Martha’s Vineyard under another name. The ferries ceased operation Aug. 2, 1969, when the Coronado Bay Bridge opened for use. Under California law, ferry boats are banned from operating within 10 miles of a toll crossing. However, in 1986 the construction fees were paid off on the Coronado Bridge, so the toll was removed and the ferries began service again but now only transporting people and bikes. In 1986 not only were the ferries in service different but the landing point had also changed. The original ferry landing was at the base of Orange Ave. Today you can find the restored ticket booth in its original location with a plaque explaining the area to be the retired Coronado Ferryboat Terminal. Although we no longer have the original ferry boats that shaped Coronado as they brought people from all walks of life to our little island, the Ferry Landing remains a piece of Coronado history that must be remembered.