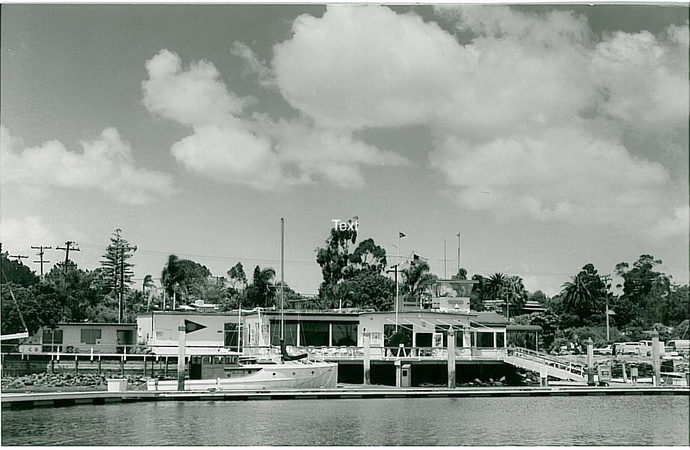 The Coronado Yacht Club has been rebuilt and relocated three times since the beginning of the twentieth century. In 1913, the original Coronado Yacht Club was unfortunately abandoned due to World War I. After the war, Coronado residents decided to rebuild the Yacht Club so that they could once again enjoy the camaraderie of boating and fishing. The new Coronado Yacht Club was built in 1932 at the old Hotel Del Coronado boathouse. The docks were not yet built when six passionate yachtsmen began to recruit members to their exclusive up and coming club. The fees for membership at this new Yacht Club was around $10.00 which was well worth the price to keep your boat at the amazing Hotel Del Coronado. Once someone became a new member they were able to get supplies in order to build a spot for their boat. The price for wood and dock material was given out on credit so that everyone had a chance to build  their perfect slip. The original 200 members built the foundations for the perfect meeting spot for novice sailors and experienced boaters.

Although the new Yacht Club was in a great location, the club moved to the Glorietta Bay for an increase of space for their ever growing members. The current Yacht Club was built in 1946 and quickly grew into a large facility in order to house the 270 yachts and the around 80 smaller boats that were kept there. The new facility soon grew into a congregation of around 900 members by 1969 with the goal of providing members the joys of sailing and fishing in the Coronado Bay. The new location of the Yacht Club brought about mixed feelings from the community, however, due to the distance from the open ocean. Even though the ocean is eight miles away from the docks the members of the Coronado Yacht Club still enjoy the ability to keep their boats in the amazing Glorietta Bay. The Yacht Club also hosts many events in order to get the community together and celebrate holidays. One of the events the Yacht Club has  hosted is the Fourth of July celebration which includes food, fun, and an end of the night fireworks display.