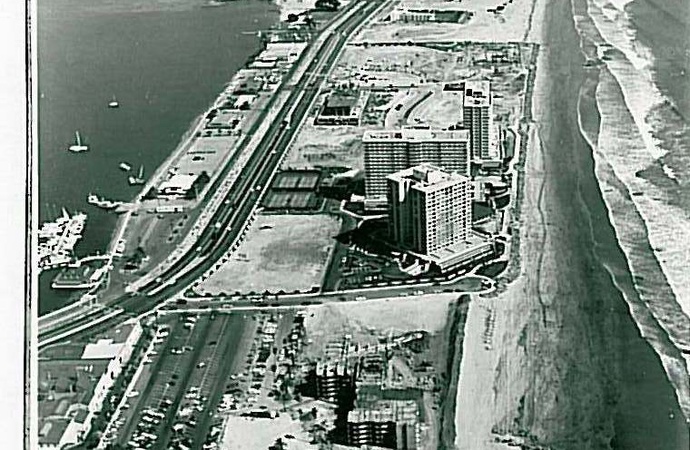 The Silver Strand has connected Coronado Island to Imperial Beach and the Coronado Cays since the first residents moved to the island. The Silver Strand was originally used for transportation from the mainland as well as providing a brickyard for the architects of the Hotel Del Coronado. The brickyard was located about halfway down the Silver Strand and was the inspiration for the name of the Cays Bay, Brickyard Cove. The Cays was a favorite spot for boaters who wanted to picnic by the beautiful bay. The Silver Strand was a pivotal part of the tourism in Coronado because of the railway that ran through it. The train brought visitors to the island and allowed for tourists to easily get to the Hotel Del Coronado. The Coronado Dairy Farm also lived on the Silver Strand before it was moved to a more centralized part of the island. In 1924 the Silver Strand was made into an official concrete road which allowed residents to travel the five mile path in cars. After the installment of the concrete road, the public voted to have a state park created on the bay side of the Strand. The creation of the park displaced many squatters who lived on the Strand but the park was eventually finished in 1936.
The state park and the bay provided spectacular views and a natural space for tourists and locals alike.

The Silver Strand was not officially part of Coronado City until it was annexed in 1949. Since the Strand joined Coronado, new construction began on both a highway and Naval Base housing that would benefit the Coronado residents. The Naval Base brought more jobs, commuters, and families to the island. The families of those that worked at the Naval Base desperately needed to find accessible housing that would allow for the shortest commute possible. The influx of families allowed the city to build more houses on the Strand. The houses were for mainly Naval families and were located about halfway down the highway. The Silver Strand Highway was built in order to make the road larger and easier to navigate for those who had to make the commute to either the Naval Base or another location farther down. Due to the fact that there were more families living on the Silver Strand, an Elementary School was built. The Silver Strand Elementary School was built in 1965 and largely resembled the South Sea Island huts that once stood in its place. In 1968 the Coronado Cays were being officially built by architects at the Atlantic-Richfield Company. The project took a few years to finish but phase one was completed in 1969. The housing on the Silver Strand and the Cays were all finished by the end of 1989. The building projects on the Silver Strand and the road itself has made the magnificent stretch of land into what it is today. The remarkable state beach on one side and the glittering bay on the other present a natural beauty to the highway and the houses that rest upon it.