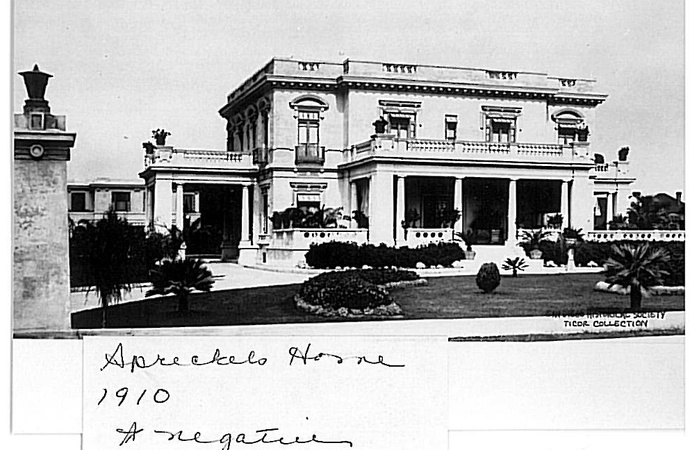 The Glorietta Bay Inn, located at 1630 Glorietta Boulevard, is one of the island's most treasured pieces of history. The original building dates back to 1908 when John D. Spreckels, a businessman that helped develop not only Coronado but also San Diego, had it built to become his permanent residency.  Spreckels wanted the mansion to mirror architecture from the Italian Renaissance and also wanted to include a parlor, library, and music room. Spreckels lived in the Glorietta Boulevard mansion until his death in 1926. At that time, Spreckels' Mansion featured a brass cage elevator, a marble staircase, skylights, marble floors and elaborate gardens. In 1928, the Mansion was sold to Ira Copley, owner and founder of today's San Diego Union-Tribune. Copley renamed the Mansion "Dias Alegres" - or "Happy Days". From 1928 to 1949, Mr. Copley made only minor changes, including adding bedrooms and enclosing the third-floor Solarium. In 1949, local Realtor Louis Millen purchased the Mansion. Soon after purchasing the Mansion, Millen began renting out the rooms in the European bed-and-breakfast fashion, and the Mansion became known as Millen Manor. He then sold the property to Barney Padway, who started to add the surrounding buildings, which today provide 89 guestrooms. A real estate partnership owned the property briefly after Mr. Padway. The partners decided to operate the hotel as an independent and unaffiliated inn in order to preserve its character. In 1977 the inn became a historical landmark because of the owner's hard work to preserve the history of the building by restoring and protecting the landscape. Today the Glorietta Bay Inn can be enjoyed by guests everywhere while being submerged in the history of the building's origin.