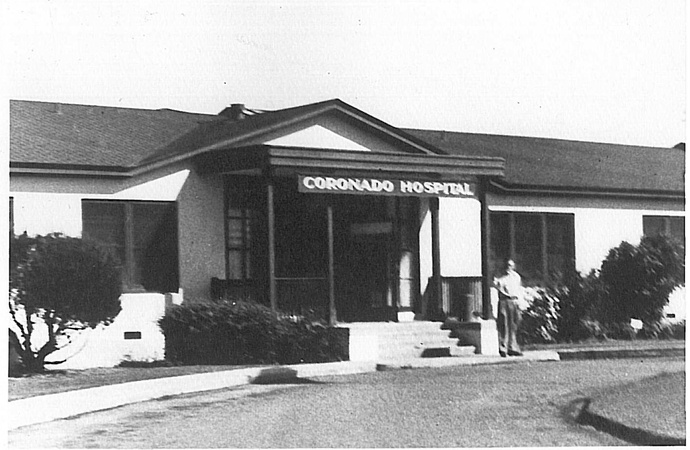 Throughout the mid nineteen twenties, the necessity for a hospital on Coronado Island was seen by a few residents. One man in particular, Dr. Arthur B. Wegeforth, decided to build a small hospital for those on the island who needed medical help. Wegeforth’s hospital, located in the Spreckels Building, had only four rooms but it acted as the main hospital for most residents. Due to unforeseen financial difficulties, Wegeforth’s hospital was shut down, but local Maud Lancaster started running a small hosptiral operation at a home on Eighth Street and Alameda Blvd. She quickly moved the hospital across the street from where Wegeforth's hospital was located. The building at 1111 Orange Avenue was converted into a hospital in 1927. This privately owned hospital operated as the Coronado Emergency Hospital.

The hospital was considerably smaller than that which we have now. The hospital only had twelve beds and was used for emergencies only due to the fact that there were other doctors offices on the island being used for smaller issues. After successfully operating for over a decade, it became clear that the small hospital would need to grow. The J.D. and A.B. Spreckels Company donated land for a new, larger hospital to be built in 1939. However, it would be several more years before the hospital project would get underway. In the meantime, the Coronado Emergency Hospital fell on hard times financially and was slated to shut down on December 31, 1941. Before the date came, a Coronado resident named Mrs. Styer proposed a plan that would allow the hospital to remain open for six more months while a new facility was being built. She believed that with the continuing war, Coronado residents needed a hospital in town. Mrs. Styer paid for the equipment and rent for the old hospital while also donating the funds collected for the construction of the new one. Mrs. Styer’s contribution allowed for Coronado residents to have a working hospital while a newer facility was being built.

Finally, in 1942 the new Coronado hospital was built at the current location on Soledad Place and Third Street. The hospital board had decided that the new hospital should be a brand new building rather than converting an old one. The hospital was built on a large lot so that it had ample room to expand if the population of Coronado needed it. Many of the internal facilities were also made larger than normal because the hospital board anticipated an expansion in the future. Mrs. Styer also sold the equipment from the old hospital to the new one so that they would have everything they needed before opening. As the population of the island grew, more beds were installed and it eventually became a non-profit and community-owned hospital that thrived under a new board system that governed all decisions. In 1970, the Coronado Hospital had sixty-four beds and had four different floors. In 1978 the Coronado Hospital Foundation was established that eventually led to the merger between the Coronado Hospital and Sharp Healthcare. After the two organizations joined in 1994, the hospital was renamed to the Sharp Coronado Hospital, and has been a cutting edge facility in regards to new treatment options. The hospital has provided new and improved treatments for patients in the areas of technology and hospitality. The history of the hospitals on Coronado tells a story of community and sacrifice that inspires many locals today.