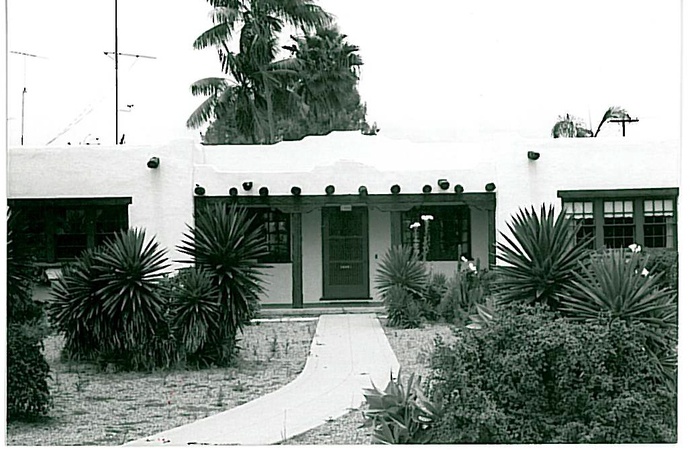 William Templeton Johnson was born in 1877 in Staten Island, New York. Johnson came to San Diego in 1912 shortly after his studies at the L’Ecole des Beaux-Arts in Paris. He and his wife relocated to San Diego, primarily due to his wife’s family’s interest in Coronado and San Diego.

From 1912 to 1916, he established his own architectural firm. In 1912, he designed the Francis Parker School “quadrangle” plan buildings and several residences in both Coronado and San Diego. When Irving Gill closed his office in 1916, Johnson became perhaps the leading architect practicing within San Diego. Although Johnson was comfortable with the architectural styles of the era, his preference for structures with “Mediterranean” character prevailed.

In San Diego, he participated in numerous designs including the 1915 Panama Califomia exhibition buildings in Balboa Park. He also designed the Serra Museum, the Museum of Fine Arts, the La Valencia Hotel, and the San Diego Trust and Savings Bank.

From 1930 through 1933, he was involved with several construction projects in Balboa Park, including the base for the statue of El Cid Campeador and the design of the Museum of Natural History.

Between 1935 and 1938, he designed several public structures for the Federal, City, and County governments including the County Administration Building. From 1939 until his retirement in 1955, his architectural firm designed a number of residences, at least ten school buildings, the San Diego State University Master Plan, and the main branch of the San Diego Public Library.

For his contributions to the city, San Diego designated Johnson as a Master Architect.

Johnson was a resident of Coronado for a number of years in the early 1900s until he moved to San Diego. He designed and built a number of Coronado homes. Four of his designs were designated as Historic Resources.

Architect biographies compiled through the use of: