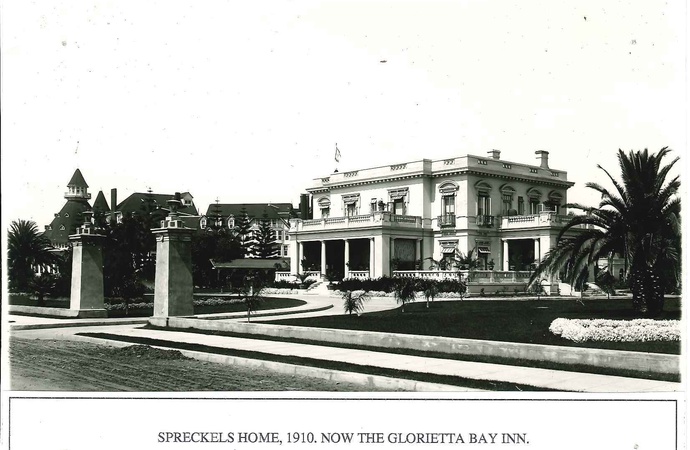 Harrison Albright was born in North Philadelphia, Pennsylvania in 1866. He was educated in the local public schools and at the Peirce College of Business and the Spring Garden Institute in Philadelphia. In 1886, he began his architecture business designing residential and public projects in Philadelphia.

In 1901, he was hired by Indiana hotelier Lee Wiley Sinclair to design the landmark West Baden Springs Hotel which included the largest free spanning dome in the world until 1913 and the largest in America until the construction of the Bojangles' Coliseum in Charlotte, North Carolina in 1955.

Albright would soon have a particularly significant impact on the cities of San Diego and Coronado through his relationship with John D Spreckels. Spreckels was a very successful businessman whose vision and legacy remains visible today in both cities through his extensive business ventures and acts of philanthropy. Having lived through the 1906 earthquake in San Francisco, Spreckels wanted to ensure that his family would never again see the walls around them collapse or be consumed by fire. Toward that end, he turned to Albright, who was making a name for himself as a proponent of a new building style incorporating steel-reinforced concrete.

In San Diego, Albright was noted for several significant works including the open-air Spreckels Organ Pavilion in Balboa Park which was part of the 1915 Panama-California Exposition, the U. S. Grant Hotel, the Spreckels Theater Building, and the Golden West Hotel.

In 1907 Spreckels contracted with Albright to design two Coronado homes for him and his family, one on the bay, one on the beach.

Albright began work on the design of the “Beach House” on the ocean, facing Coronado beach. The building, designed with the simple, classic lines of Italian Renaissance, was completed in 1908 and provided impressive views of the beach and ocean. The home which has been often been referred to as a mansion was built with reinforced steel and concrete, an earthquake precaution and innovative technique for the time. Spreckels gave this “Beach House” to his son Claus as a wedding present in 1910 and Claus's widow, Ellis, lived there until her death in 1967. The home located at 1043 Ocean Boulevard was designated by the city as a Historic Resource in 2006.

The Coronado Library was founded in 1890 by the Coronado Library and Free Reading Room Association. In 1895 the Hotel del Coronado provided a rent-free small pavilion building for use as the "Coronado Beach Library", which was located by the trolley stop across the street from the hotel.  John D. Spreckels, then owner of the Hotel del Coronado, was later asked by the Coronado Library Trustees to build a permanent library building. Spreckels agreed and again commissioned Albright to design a library building which still serves as an excellent example of Neoclassical architectural style. The library at 640 Orange Avenue was built in 1909 and designated by the city as a Historic Resource in 2005.

Spreckels also commissioned Albright to design the Coronado Bank building which was built in 1916 on the corner of Loma and Orange. Its outstanding characteristics included the curved design of the building that follows the bends of Orange Avenue. It is in a Neoclassical style with tall Corinthian columns, elaborately designed door surrounds, and leaded glass windows.

Albright retired from architecture for health reasons in 1925 and died in 1932.