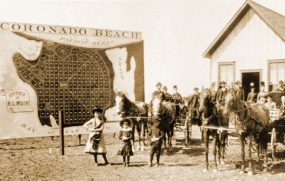 Our story begins in the early seventeenth century when the Spanish explorer Sebastian Vizcaino caught sight of a group of islands seventeen miles off the coast of southern California and named them Las Yslas Coronadas.

These men surveyed the territories now known as San Diego and Coronado yet failed to settle in the area. For almost 200 years the peninsula remained bare.

While still under Spanish control in the early nineteenth century, Coronado was used as a safe harbor by whalers who also began to build hide houses to carry out their work. After Mexico gained its independence from Spain in 1821, land grants were issued for various sections of California, thus creating the grand rancheros and haciendas of this period. On May 15, 1846, a land grant was issued to Don Pedro Carrillo by Governor Pio Pico for "the island or Peninsula in the Port of San Diego." Carrillo's ownership of the land was brief as he sold the property just five months later to the American captain of a trading ship, Bezer Simmons, for $1000.00.

Babcock then invited his brother-in-law, Heber Ingle, and Josephus Collett, a railroad stockholder, to become investors. Thus the founding fathers of what is today known as Coronado organized the Coronado Beach Company on April 7, 1886. 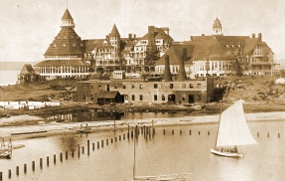 Work began immediately on the resort community that the Beach Co. investors envisioned. The men hired hundreds of laborers of various nationalities to begin the division and landscaping of lots, the laying of railroad tracks, and the construction of a water and irrigation system. In order to accommodate the growing number of people journeying to the peninsula, Babcock and Story created the San Diego and Coronado Ferry Company on April 16, 1886, with the ferry Coronado completing its first run on August 19th.

Babcock and Story leaked news of a proposed hotel on Coronado to the local newspapers which caused a great deal of excitement in the community of San Diego and beyond. With the increased publicity surrounding this grand venture came new interest in the community planning of the peninsula. Thus on November 13, 1886, the Coronado Beach Co. held an auction for the sale of lots ranging in price from $500.00 to $1600.00. By the end of the day, the Beach Company had sold 350 lots for a total of $110,000.00, which was, incidentally, the purchase price of the entire peninsula.

The resort community was now coming together with many new residents building homes and businesses. The investors then began to concentrate on the design and construction of the new hotel. The Beach Company hired James and Watson Reid as the architects of the Hotel del Coronado and work began almost immediately with the groundbreaking ceremony held on March 19, 1887. The Hotel del Coronado, completed in early 1888, officially opened its doors to the public on February 19th.

By the fall of 1887 and throughout 1888, Coronado was developing into a community, particularly with the founding of various organizations.

The first school session began on January 24, 1887, in the walled tent on Seventh Street and D Avenue until construction of the first schoolhouse was completed in 1888. A Boating Club was organized in late 1887 with an Athletic Club and a Baseball Club to follow in early 1888. 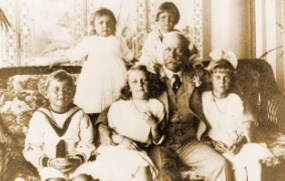 July 1889 proved to be a momentous month in the history of Coronado as John D. Spreckels became an investor in the Coronado Beach Company, buying out Hampton L. Story's one-third interest. Over the next three years, Spreckels bought controlling interest in the company and became the sole proprietor of the Hotel del Coronado. He also oversaw the building of the grand mansion on Glorietta Boulevard, the establishment of Tent City, and the sale of North Island to the U.S. government in 1917.

While the Hotel del Coronado became one of California's most beloved destinations, the resort community increased its visitors with the rise of Tent City.

Vacationers flocked to the make-shift city at the foot of the Hotel del for summer fun. There were swimming facilities, carnival booths, a ferris wheel, a children's bull fight, aquaplaning, sailing, and numerous activities for the entire family. Tent City remains a fond memory for many residents of Coronado and vacationers from around the world who visited the peninsula between 1900 and 1939.

Many of Coronado's treasured traditions began in the first quarter of the twentieth century. The founding of the Horse Show, Flower Show, the arrival of Edward, Prince of Wales, and the early experiments in aviation on North Island, including the departure of Charles Lindbergh in 1927, have established Coronado as a premier city. Moviemakers found the setting ideal, and through the years, many films were made in Coronado and on North Island, including "Some Like It Hot", "Dive Bombers," and "Hellcats of the Navy."

Because of the proximity of North Island, Coronado inevitably became known as a Navy town. 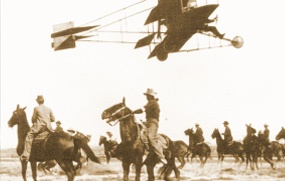 Destined to become one of the great aviation arenas in the world, North Island was originally used by the Hotel as a spot for jackrabbit hunting. In 1911, famed aviator Glenn Curtiss found the area ideal for experimenting with his newly developed seaplane, and leased the land for three years from John Spreckels. During that time, Curtiss performed the first successful United States seaplane flight and the first amphibian flight in the world. At the same time, he opened and operated the first U.S. military flying school. There he trained Lieutenant Theodore G. "Spuds" Ellyson, the first naval aviator. Eventually, North Island became a joint Army/Navy base, after the government bought the land from John Spreckels for five million dollars. In the ensuing years, one flying record after another would be set in Coronado including:

The Army vacated its portion of the island in 1935, and the entire area then became Navy property. In 1944, the Army Corps of Engineers filled in the body of water separating North Island from Coronado, (known as the Spanish Bight) to allow for more construction. North Island today is an island in name only.