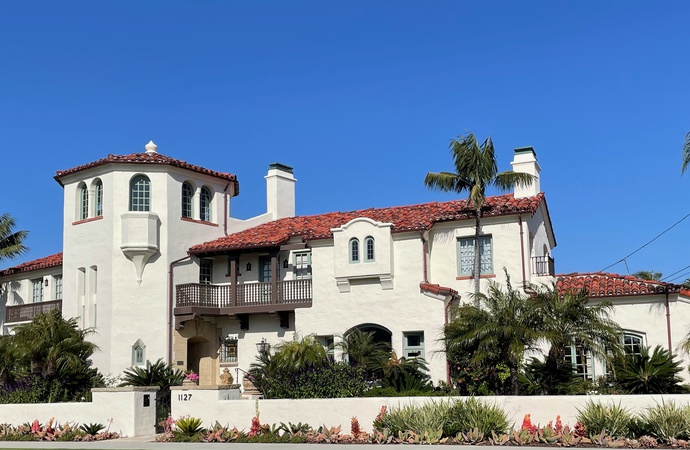 In 1925, Coronado saw the collaboration of renowned Architects Richard Requa and Herbert Jackson, along with Builders A.E. Keyes and the Reed Brothers culminate into our next beautiful GEM nominee, 1127 F Avenue. This Mission Revival ‘castle-like’ residence, was originally built for Michigan furniture manufacturer, W.A. Gunn. It was designated a Historic Resource in 2004 and received its Mills Act recognition on October 30, 2016. It served as an illustration for Requa's 1926 article in San Diego Business titled The Architectural Style for Southern California.

The original cost of the home was $56,558 which was well over ten times the average cost of a typical Coronado home at that time. Notable residents include Albert H. Lahman (1952), Sherman Hartland (1961) and Eugene H. Ephron (1969). It served as an illustration for Requa's 1926 article in San Diego Business titled The Architectural Style for Southern California.

In her 1982 Master’s thesis, Mary Taschner wrote: "In 1924, Requa had begun another elaborate house for William A. Gunn of Coronado. Although not as large as the Del Mar Castle, the Gunn house has many of the same [castle like] characteristics … The Gunn house has a long sprawling plan with an angled wing and varying roof levels [and] dominated by a huge tower or turret. Because the Gunn house is smaller, there is only one tower which serves as both the entrance hall and upstairs turret room. Perhaps because the Gunn house seemed more like a home than a castle, Requa lavished more attention on the garden than he had at the Del Mar Castle. He turned the pie-shaped Gunn lot into a formal Moorish garden complete with a tiled fountain, pergola and lath house. As with the Harding house, Requa also included quarters for the servants at the far end of the garden.”

“When we started, I was optimistic, and I thought the work would take 2 years at most. It turned into a 4-year opus” Brian Mariotti describes his odyssey to renovate 1127 F Avenue. Brian remembers his initial sense of an “old Hollywood, Spanish vibe” when walking into the home, but noted the rest of the house did not share what he and his wife Shannon loved about the façade and entry hall of this “Coronado’s Castle.” The floors upstairs were covered with wall-to-wall carpet with popcorn ceilings overhead. The incongruence isn’t surprising as the home had changed ownership many times since its 1925 birth. In fact, the home seemed to lose a bedroom and gain a bathroom over time, from 6 bedrooms and 5 baths, to 5 bedrooms and 6 baths, to 4 bedrooms and 7 baths from the 70s to the late 90s.

Brian and Shannon along with their team led by San Diego architect Kim Grant and Papenhausen Construction set out to restore what they could, replace with old materials or replicated elements. Brian gratefully added that Grant, who specializes in historic homes, and Papenhausen “were particularly good at presenting us with all our options, but my wife and I always defaulted to the most historically accurate option. We love the old, lived in feel.”

All the windows were scraped, and hand painted. The popcorn ceilings upstairs opened and pitched. Ceiling beams of over 100-year-old wood were added, many with hand painted detailing. Hundred-year-old terracotta flooring was found for the main level, and Moorish tiling from Mexico for the staircase risers. Additions to the nascent Moorish influences are sprinkled everywhere. Moorish stars and designs can be found inlaid on the floors, walls, and ceiling.

On the main level, a family room was added to the west wing of the house, meticulously mirroring the style of Requa’s façade. The dining room was pushed out to capture what had been an outside space, and custom glass doors outline the space in between the stone columns along the rear wall facing the backyard. The backyard space presents another living space featuring a large living and dining room pavilion. A putting green, dog run and pool with a diving board complete the fun zone. Carefully preserved 100-year-old olive trees mesh beautifully with newly added 250 year old stonework around the pool and Moorish ironwork features of the facades of the converted original garage to guest house as well as the new garage.