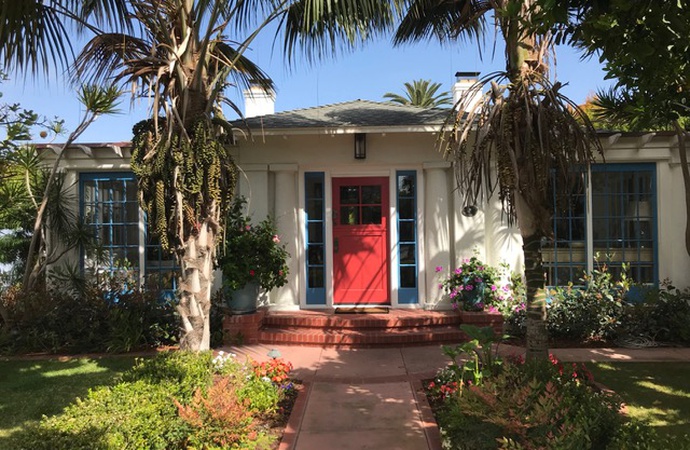 Another true ‘jewel’ in our Coronado crown is our next home, 1111 G Avenue. Known as one of the ‘Three Sisters,’ it is located just off of Alameda Boulevard where it intersects with G Avenue and is set back on the property with its two sisters on either side. Sidney D. Chapin was the Builder of this 1914 Bungalow and William Templeton Johnson was the Architect. Johnson is considered a San Diego Master Architect. He is known for several San Diego landmarks including the San Diego Museum of Art building and the Natural History Museum in Balboa Park. He was also one of the architects involved in the County Administration Building.

1111 G Avenue was designated a Historic Resource on April 5, 2006, and became a Mills Act historic home on December 24, 2019. This charming home is 1551 square feet and has 3 bedrooms and 2 bathrooms. It may be the smallest of our GEM nominees this year, but it is by no means lacking in anything! Although the house is small, it is important to note that the outside space makes the home feel much larger. The front walkway and yard, now shared by the other two “sisters”, is solely part of the 1111 G Avenue lot and deed.

One of the former noteworthy residents of 1111 G Avenue was Commander Karl F. Smith. Commander Smith graduated from the United States Naval Academy in 1908, becoming Chief Engineer and Fleet Engineer of the Asiatic Fleet in charge of the raising of German battleships after World War I. He rose to Inspector General of Aircraft at the start of the Bureau of Aeronautics.

Commander Smith retired from the Navy in 1929 and lived here until his death in 1959. He was very involved in the Coronado community: he was a Mason; a warden of Christ Episcopal Church; served on the Board of Directors of the Red Cross; a member of the Military Order of World Wars, and served on the Coronado School Board from 1943-1947.

Twenty-five years ago, Doug and Jane Brandt, the current owners of 1111 G Avenue lived in another historic home in Coronado on 1st Street. A job location change led them to La Jolla for the next decade. Coronado still called and they answered, returning to settle on the island once more on B Avenue. They ultimately landed at 1111 G Avenue all thanks to a book club. As Doug explained, “My wife always loved 1111 G Avenue, and her friend and fellow book club member Betsy Jordan and her husband owned and took loving care of 1111 G Avenue. Betsy knew of my wife’s fondness for her home, so when Betsy was ready to make a change, she called to ask if we would be interested, and we jumped in with both feet.”

It was the perfect match. The Brandt’s love of remodeling and small homes was born in their home state of New Jersey. They loved to combine the old and new. In approaching the renovations to 1111 G Avenue they paid homage to the past with a “keep whatever you can” attitude while updating were needed to improve day-to-day life. This approach was honed when the Brandts lived in a historic 1925 home in Oregon. It was the Oregon weather that led them south. “On one of our monthly visits to the Coronado Marriott, we were in the pool when my wife declared it was time to make the leap and move to Coronado,” Doug recalled. It may have been a circuitous path from 1st Street, to La Jolla, back to B Avenue in Coronado that let them home to 1111 G Avenue.

After closing on the home in May 2018, Doug and Jane were able to live in the tiny guest house behind the main home while the work was completed over the next nine months. Not much had to be done to the facade. In 2004 the windows and wood and brick had been replaced, but the interior needed more love and attention. The kitchen and two bathrooms were updated and two wood-burning fireplaces converted to gas. The work uncovered original oak wood floors that had been sanded only twice before in over 100 years. It was so unique that their floor specialist had never seen anything like it before. Doug, having the experience of framing several homes himself in his short carpentry career after college, appreciated the craftsmanship revealed as they opened up the back of the house and pushed out the master. The framework is “gorgeous” and Doug and Jane wanted to keep as much of the original frame as possible. In opening up the ceiling of the master they discovered 1 x 8 inches pieces of pristine pine that had been sitting there for decades. The kitchen had conveniently been opened up and remodeled by the owner of the property before Betsy Jordan, who was a kitchen remodeler by trade. “We simply replaced appliances and cabinetry, added an island, and were able to keep the flooring in the kitchen as well,” added Jane. A skylight and high ceilings in the kitchen and throughout the home make the space feel much larger than the footprint would imply.

The owners began their lives together in a small home. It was featured as BEST SMALL HOUSE for House Beautiful Magazine. Doug and Jane loved it so much, they bought it and moved in! So, the 1551 square feet they now call home at 1111 G Avenue is like coming full circle, but in a much better year-round climate than New Jersey (or Oregon) could ever provide.