The Coronado Historical Association's GEM Committee is pleased to announce this year’s finalists:  216 H Avenue, 1006 G Avenue, and 1109 F Avenue. Learn more about the history of each home and the GEM Award below.

The Annual GEM Award is truly a community award! Last year, the 2019 GEM Award was presented to Debi Boney of Boney’s Bayside Market for her home at 615 B Avenue. The GEM—Going the Extra Mile—is an award that recognizes a homeowner’s commitment to preserve and restore, rather than replace, a historic home, contributing to Coronado’s unique and architecturally rich built environment. The first record of this charming Craftsman Bungalow was in 1916, making the home over a century old, rendering the restoration project all the more impressive.

As Debi Boney and her son Ryan Boney graciously accepted the award, last year Debi said, “I am honored to be recognized for the improvements to my home. I feel the GEM Award represents a great initiative to homeowners representing their efforts to retain and restore our community values in architecture.” 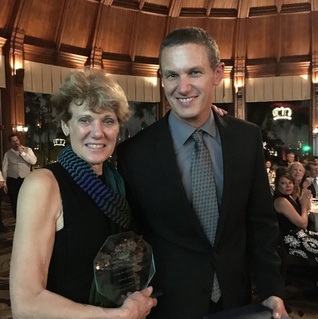 Undoubtedly, what makes the annual award so special is its ability to spur interest in Coronado’s fascinating past. As Jami Teagle-Burgos, the 2014 GEM award-winner, stated, “[My husband] Chander and I discovered the home we purchased was truly a ‘historic’ GEM.” After conducting research, they learned that their home was designed and built for the celebrated Father of Naval Aviation, Glenn Curtiss. Underscoring the significance of the award, Teagle-Burgos continued, “The GEM Award resulted in our engagement with the community by becoming involved members of CHA and serving on the Board.”

Each year, the GEM Committee considers historic homes and properties that have been nominated by CHA membership. GEM Award finalists must have completed a recent restoration or renovation project true to the historic character of the home by December 31 of the prior year. The GEM committee researches the history of each home before making its selections. The Coronado Historical Association's GEM Committee is pleased to announce this year’s finalists:  216 H Avenue, 1006 G Avenue, and 1109 F Avenue. These are Coronado’s GEMs. These owners truly Go the Extra Mile.

Many homes in Coronado have a history that is easily traced, while others remain mysteries. This 2020 GEM Award nominee is one of those houses with mysterious beginnings. The first documentation of the home is in 1919 when the house was moved from a lot on First Street to its current location on H Avenue. Information prior to the move is scant; the only known fact is that the homeowners at the time of the move were Harold and Laura Hanson.

The home was later owned by Albert & Freda Bram for a short time in the early 1940s. Albert Bram was a well-known local as the owner and operator of La Avenida Cafe. La Avenida was a popular restaurant with the tagline “where Coronado meets & eats”. It’s not known if this charming California bungalow was the Bram’s residence or if they rented it out during their ownership.

Current homeowners David and Skylar Matthews were drawn to the house initially because of the garden. They bought the house in 2016 and David notes that one of the big draws was the historic jacaranda tree. Having grown up a Coronado native, he appreciates the historic structure as well as this other connection to the built environment. He recently rebuilt the historic arbor that now has climbing roses blooming over it.

The Matthews’ work didn’t stop with the garden, they did extensive work on the interior of the house as well. A narrow stairwell that was added in the 1980s had to be expanded, the poarch was covered, and a few of the bathrooms needed to change. Additionally, what was the original master bedroom on the first floor was converted to be the main living area. David explained that the renovations were needed to accommodate a modern flow of the rooms, “to make the house our own”.

However, the renovations didn’t take away from the historical character of the home. The second story retained all of the original hardwood floors (brought up from the first story); much of the door hardware that was hand stamped was saved and reused; doorknobs in crystal and silver were kept. Most interestingly of all, a sliding door rail system was found behind one of the walls during the remodel. It included a barn door that David suspects to be from the Hotel del Coronado around the time that it was being built. The Matthews saved the door and the rail system and reinstalled it in the home as a testament to history. 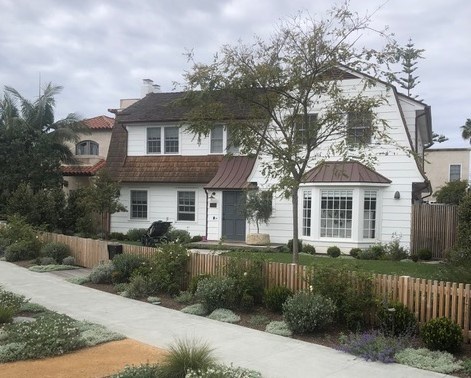 This Dutch Colonial Revival home at 1006 G Avenue dates back to Coronado’s aviation beginnings, with its connection to two early Naval aviators. The home was built in 1917 for Commander and Mrs. H. B. Cecil. Commander Cecil was one of the first 50 pilots trained by the Navy at North Island. He served in the Navy Air Force during World War I. Cecil lost his life when the dirigible Akron crashed on April 4, 1933. His widow remained living in the home until it was purchased by another Navy widow in the 1940s.

Mrs. Marc Mitscher made G Avenue her home after the passing of her husband Admiral Marc Mitscher. Mitscher was another pioneer in naval aviation, a contemporary of Commander Cecil. He eventually served as commander of the Fast Carrier Task Force in the Pacific in World War II and rose to the rank of Admiral. Soon after his passing, Mrs. Mitscher moved into the home in 1947 and stayed there until her passing in 1982. She was an active member of the Coronado gardening community, winning many home front prizes in the Flower Show. After Mrs. Mitscher, the home remained in the family until 2017, when Chip & Candice Kislack bought the property. They are only the third family to own it over it’s long history.

Candice explained that the whole aim of the renovation was to “respect an old house but have modern amenities and style.” For example, to keep the historic look of the home, the wood shingled roof needed replacing, but current codes require a different material. So, they ended up putting wood shingles over a modern roof to have a safety net but not compromise on the historic character.

Other nods to Coronado’s past include historic light fixtures from Coronado High School that a former athletic director saved and the surprise discovery of an underground bunker in the backyard. Though that piece of history was unable to be saved, the Kislacks were able to use the fixtures in their son’s sports themed bedroom. 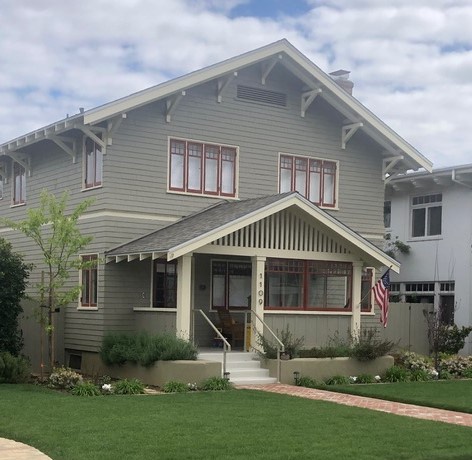 The 2020 GEM Award nominee at 1109 F Avenue was built by one of Coronado’s most prolific builders, S. D. Chapin, in 1913 for an exorbitant $5,750. Chapin was one of the most popular Coronado builders at the turn of the century, having arrived in San Diego in 1898. His work was very distinct; the Coronado Journal wrote in 1916, “[Chapin], the leading contractor of the city, has the remarkable record of having built more than 200 Coronado homes, and the description, a ‘Chapin-built home,’ has come to mean beauty and stability of construction with every modern improvement.”

To current owners, Harry & Jessica Thaete, part of the appeal of the house was it’s enduring charm that Chapin built. Having lived a few houses down for 30 years, the Thaete family were familiar with the house. As Jessica puts it “I would just look at the house and say ‘boy would I love to own that house and renovate it’.” When the house came on the market in 2017, they jumped at the chance to call it their own. Working with their daughters, the Thaetes took on a renovation project that took over a year to complete. “We put in a lot of heart and soul into it,” says Jessica.

Almost every part of the home was under construction. The home needed lots of work including all new plumbing and wiring. The kitchen was also expanded from its original 7 x 7 size. Despite the changes, many elements of the past remained. The Thaetes retained the butler’s pantry and elements throughout the house such as the wood floors, trim, cabinetry and hardware are original.

Prior to the Thaetes, the home was only ever owned by two families: The Earles from 1913 to 1958 and the Stockers from 1958 to 2017. The Earles did occupy the home from time to time, but also rented out the home to many military families. Later, Dr. George Stocker and his wife Betty raised several children in the home. Dr. Stocker was a World War II veteran, serving in the Southwest Pacific Theater with 1st Marine Division. After the war, he worked in various military hospitals, including as Chief of Radiology from 1960 to 1965, commuting from the home on F Avenue. Between the achievements of the former occupants and retaining the character of the builder, the home is a historic gem in Coronado. As Harry, remarked “it’s important to protect houses from Coronado’s early years.”

Thank you to the community for your many wonderful nominations! This year the GEM Committee’s work was cut out for them. They are happy to announce that in addition to the above finalists, they would like to recognize the many thoughtful restorations that are being completed this year, such as the Stockdale house located at 547 A Avenue and 532 Marina Avenue. We anticipate that next year will be a full year of GEMs to choose from! Keep an eye out in History Matters, as we announce this year’s winner!