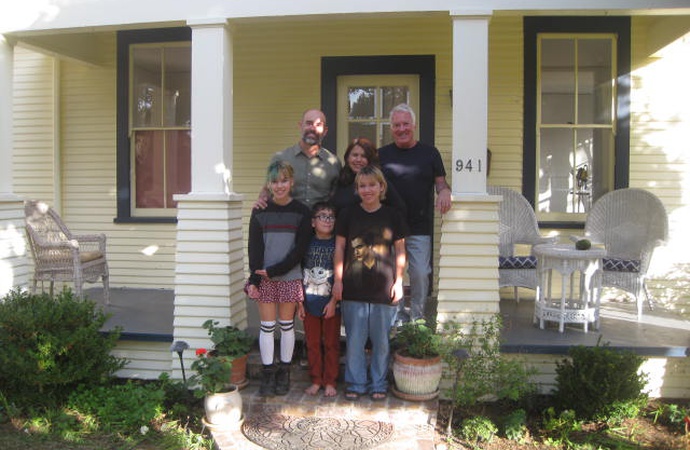 Many homes in Coronado have had several generations -- some three, four or more -- keep the premises within the same family for decades.  This is true of the single story clapboard Craftsman Bungalow originally built in 1904 at 941 G Avenue.  Set back from the sidewalk by a low white picket fence, the shaded lawn boasts a curved brick walkway that leads to a porch with a multipaned glass front door flanked by large windows welcoming visitors to the home.  In October 2004, the home became the 45th residence designated historic by the Coronado Historic Resource Commission and proudly displays the plaque at the bottom of the front door.

The first generation to occupy the home, beginning in 1936 was renowned portrait painter Mary Parrish McCartin, a 1917 graduate of the Rhode Island School of Design.  Married to Lt. Cmdr. Edward F. “Mac” McCartin, USNA 1918, Mary traveled the world before settling in Coronado.   She put aside her paint brushes to raise her daughter Ann (b. 1928) for several years before beginning her career as a portrait painter of many well-known personages including Admiral Ernest J. King, Commande r in Chief of the US Fleet, as well as numerous Navy Juniors on the island. Her talent was attributed in part to her father, William Dana Parrish, who had studied under John Singer Sargent and William Chase and had operated his own art academy.  Parish, widowed in 1937, in Chatham Massachusetts, joined his daughter Mary in Coronado, making two generations of the family in the home.

Following the death of her husband Mac in 1939, Mary commissioned John Washington to build a studio apartment with a wall of north facing windows in the backyard; the perfect setting for the father/daughter artist team.  Built for just $600 in 1940, the rentable Studio cottage today is furnished with a number of Mary’s and Will’s paintings hanging on the walls (the Coronado Museum exhibited their works in 2006).  In 1942 Mary and 14-year-old Ann left Coronado for the East Coast; the home was rented out although the Studio remained Mary’s winter residence, with her second husband Joseph L. Marshall, of Lewes, Delaware, from 1947 to 1971.  Rent for the 6-room house was advertised in the Coronado newspaper for $24 per month to a “non-service tenant” in 1938 while the studio guest house was listed at $55 per month (“no children or bachelors”) in 1953.

During a whirlwind romance, Ann met Henry Drexel Patterson in the summer of 1948 in Lewes, Delaware and soon were married.  They raised their children Sherry, Drexel and Dana, first in New Castle and then in 1965 they built a home in Wilmington.  The Coronado home was still in the family and was leased to Brig. Gen. Edward L. Pugh USMC and Mrs. Margaret Mary Pugh for many years.   The couple opened the St. Therese’s Book Shop on Orange Avenue and Mrs. Pugh served as head of the Coronado PTA,

By the mid-1970s Ann and Henry, who were then living in the Virgin Islands, spent part of the year in the Studio, while the front house remained leased.  Fresh out of Pratt Institute’s architecture school in 1978, Drexel came out to help Henry make long needed improvements to the property; removing a wall dividing the two front rooms and finding tucked within the furring strips under the plaster, a newspaper clipping dated 1905.  They updated finishes, added a tiny bath to a front room and reconfigured the rear roof line of the house.  Lorton Mitchell, a freshman architecture student at the time, worked that summer as their framing carpenter.

Ann and Henry permanently moved to Coronado after a 12-year adventurous life on St. John from 1973 to 1985, becoming the third family generation living in the home.  They reconnected with Ann’s many childhood friends and walked back into a life she had been wrenched from in 1942, fulfilling her greatest wish throughout her 43-year absence.  Together they enjoyed gardening, dancing and remodeling another home in San Diego, using among other things, tools left in the cellar by Ann’s father.  They entertained neighbors and old Navy friends of her parents regularly.  They gradually became active in the historic preservation of Coronado for the next 20 years. Henry’s death when he passed away in 2005 at age 91.

While scattered around the world (France, USVI and Arizona), the Patterson adult children (the family’s fourth generation) often visited their parents during summer vacations.  Daughter Sherry Thevenot traveled with her children, Laurent and Elisa; from France while daughter Dana Patterson Lopez vacationed with her children, Rainbow, Guinnevere and Jasmine Starlight, from Tucson.  Son Drexel with his wife Susan, moved from the Virgin Islands in 1989 and resided for a time in the front house.  Their son Morgan was born at the Coronado hospital in 1990 and they ultimately settled in La Jolla.  Drex and his parents continued to make improvements to the home, expanding the kitchen to include a breakfast nook and a corner fireplace, adding a third bathroom to the back bedroom and a brick patio off the kitchen in the early 2000s.

When Ann passed away last August (her obituary appeared in the Coronado Eagle & Journal  issue of August 12, 2020) the house was gifted to her three children in the hope that they would regard the property and Coronado with the same love and devotion she had held during her lifetime.. This led to the heirs discussing the options of selling the property, likely to developers, or keeping the home in the family.   Most of the grandchildren felt that the home no longer held the same family aura that had existed when Ann and Henry were alive or even when “Granmary” dwelled in the home and painted portraits.

The solution was simple:  Sherry and Dana both opted to sell their shares to Dana’s daughter Guinnevere and her husband Nathan Kappler.  The two have stepped forward to carry on the multi-generational tradition and thus become the fifth generation of family owners.  Nate, with his construction background in Tucson, and Drex, with his architectural knowhow, have recently finished refurbishing the front house for long term rental and the Studio continues to rent part time and be used by family members.

Owning the home now with her uncle Drex and her husband Nate, Guinn is proud that the compound is staying in the family and will be preserved for her own children Jorah, Braelyn and Everett (Ann’s great grandchildren) and perhaps even future grandchildren when she and Nate retire, making seven generations of a family in the home.

“Granny Annie”, with her long and peripatetic life, always referred affectionately to Coronado as “Custard Pudding”….and who doesn’t like the taste of that !