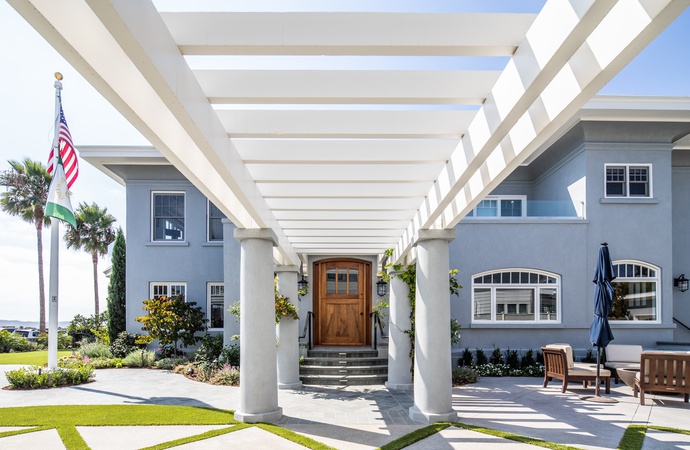 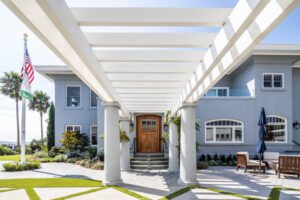 The current owners’ exhaustive search for their forever home - a historic home with an ocean view - led them to 535 Ocean Boulevard.  “This beauty with the driveway bonus space”, the owner recalls, was the home that fit their dream. The 10,700 square double lot offered just the right balance of ample private outdoor living space with an original Italianate house built-in 1911.

The house was designed by well-known San Diego architect William Sterling Hebbard. A pioneer in design and architecture standards in California, Hebbard is known for his partnership with Irving Gill. 535 Ocean was one of three Ocean Boulevard mansions Hebbard designed in Coronado, the others being 519 Ocean and 1015 Ocean, which was done with Gill. And of all the homes that he designed in Coronado, only two are in the Italianate style.

The home’s most famous occupant was undoubtedly the home’s first owner, Admiral Uriel Sebree. Sebree entered the Naval Academy during the Civil War. He later became commander-in-chief of the Pacific Fleet and served until 1910. He is also remembered for his two expeditions into the Arctic and for serving as acting governor of American Samoa. He later moved to Coronado upon his retirement and became one of the town’s most prominent citizens until he passed in 1922. 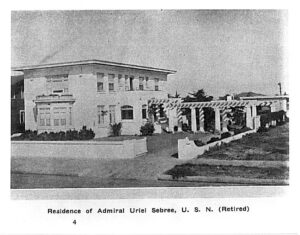 The home stayed sturdy during many of the bad storms that hit Coronado during the early 20th century. Historic photographs of the storm show the water’s edge creeping up to the property. The current owners found matching paintings that were left in the house, that depict the flooding. Luckily, the rock seawall along Ocean Boulevard later protected this beachfront property. Ninety-five years after being built, the home was designated historic by the City of Coronado's Historic Resource Commission in 2006.

To improve upon the amazing view the current owners teamed up with architect Kevin Rugee and builder Mike Tontz of Tontz Construction to go up on the roof. A hidden pocket door from the main floor opens up to the two-story stairway eventually winding all the up to the rooftop deck. Compliant with Coronado’s historical designation and thus not visible from the street, the rooftop deck features all-glass railings to capture the 360-degree view from the property including views of the San Diego skyline. The renovations were originally going to end there, but the owners and the Rugee and Tontz team were inspired to continue.  The west-facing sitting room with views of the Pacific Ocean remains original, up to the plaster coved ceiling, though significant time and effort were put into striping the crown molding, restoring the original beveled edge windows, and of course, repainting.

Opening the first-floor walls down to the studs revealed hidden treasures including original arches, old paintings of the home itself, and even a photo of the original builder.  The unusually large south-facing front door was pushed out in an earlier renovation in the ’60s to capture what was originally an enclosed front porch space. Mike Tontz and his team recreated the original large wood door to replace the modern double glass front doors. The kitchen and dining rooms were opened up and the original wood flooring, an unusual wider oak plank, was refinished adding warmth and overall continuity to the house.  Two exquisite antique light fixtures that brightened the owners' previous historic Queen Anne Seattle Washington home joined them to settle into their new southern seaside residence.

Off the ocean-facing master bedroom, an incongruent wrought iron scalloped balcony railing from a previous renovation was replaced with the same frameless glass railing featured on the roof deck.  The master bedroom sliding glass doors leading onto the balcony, also from a previous renovation, were replaced with historically appropriate windows and doors to match those on the main floor, just below the balcony.  To complete the project, painstaking efforts were taken to literally chip away at the layers of history and paint on the house in order to determine the perfect paint for the only Italianate oceanfront home in Coronado.