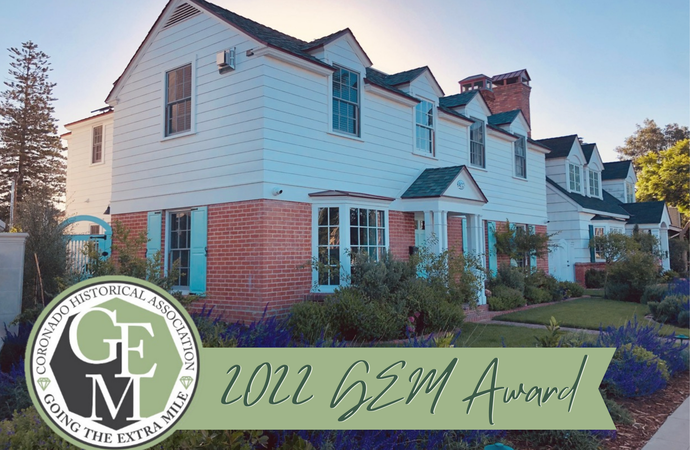 The Coronado Historical Association’s annual Preservation Festival, a month-long celebration of National Preservation Month, culminated with the much-anticipated Going the Extra Mile (GEM) Award Ceremony held in the historic Spreckels Music Room of the Glorietta Bay Inn on Monday, May 23, 2022.

Art Wilcox, Board Member of the Coronado Historical Association, presented the award to Tom and Laura McNeal for their restoration of 1030 Glorietta Boulevard. 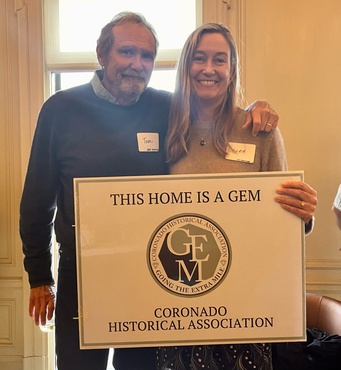 Tom and Laura McNeal at the GEM Award Ceremony.

Each year, CHA’s Going the Extra Mile Committee considers historic homes and properties that have been nominated by CHA’s membership. GEM Award finalists must have completed a recent restoration or renovation project true to the historic character of the home by December 31 of the prior year. The GEM committee researches the history of each home and learns about the hard work behind each restoration before making its selections. This year’s nominees were all outstanding examples of Going the Extra Mile, and the decision was very difficult. 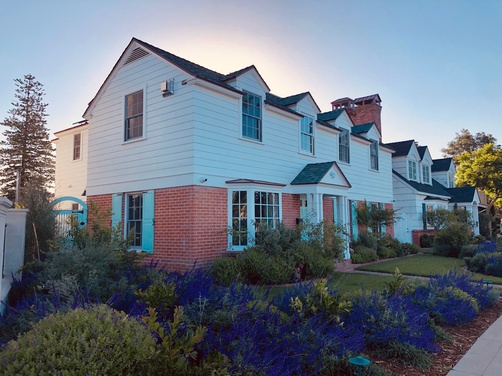 In 1939, Navy Lieutenant Thomas Carlin and his wife Katherine Carlin commissioned local architect Paul Hathaway to build the home at 1030 Glorietta Boulevard along the “mud flats”. The Boulevard faced the Bay directly, as it would be several more years before dredging debris built up land for the site where the golf course is located today.

Hathaway was not daunted by the project location. A prolific and well-known builder in Coronado, Hathaway designed the charming Colonial Revival style home for the Carlins. Once built, the couple went on to raise their two children, Mary and Tom in the home. Both Lieutenant Carlin and Katherine were active community members. Lieutenant Carlin served as president of the Coronado Realty Board and was active in Rotary Club and the Men’s Golf Club. Katherine, fondly known as Kat by close friends and family, was the co-founder of the Coronado Historical Association. She also dedicated over 20 years to writing the history of Coronado with the goal of publishing a book. Compiling research for the book, she laboriously interviewed elderly Coronado residents and read thousands of old newspaper articles. Kat passed away in 1986, but Dr. Ray Brandes took up her notes and finished Coronado: The Enchanted Island two years later.

Well aware of the property's history, the McNeals purchased the home in 2018. They worked with local Andrew Alldredge of Alldredge Builders Inc. to refresh the home. On the interior, they wanted to preserve the original woodwork around the fireplace. When the McNeals, both writers, decided to build a built-in bookcase they decided to extend the details of the woodwork into this new feature. The brick of the chimney was uncovered from behind drywall to showcase the original craftsmanship. The facade was looking tired and the homeowners took particular care to refresh the front. The original double hung windows were retained and the front repainted. The front plastic shutters were replaced with wood. The landscape was also improved with the goal to enhance the era in which the home was built. Congratulations to the McNeals on a fantastic restoration project! 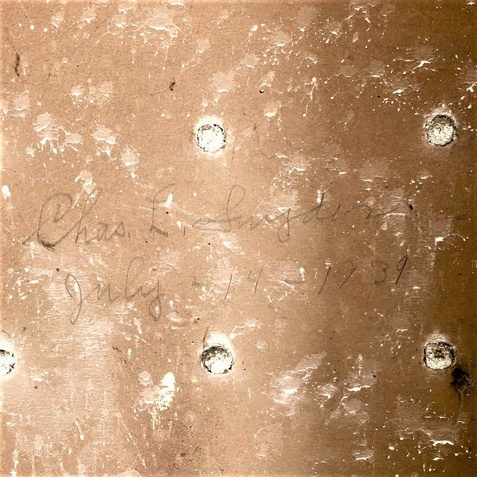 A special find during the restoration of 1030 Glorietta was when a bathroom medicine cabinet that was pulled out revealed a signature and date from one of the original contractors. In a nod to that discovery, the homeowners asked the current contractors to sign and date in a portion of the cellar for a future homeowner to discover.

This year’s runners up are: 500 J Avenue and 710 Glorietta Boulevard. 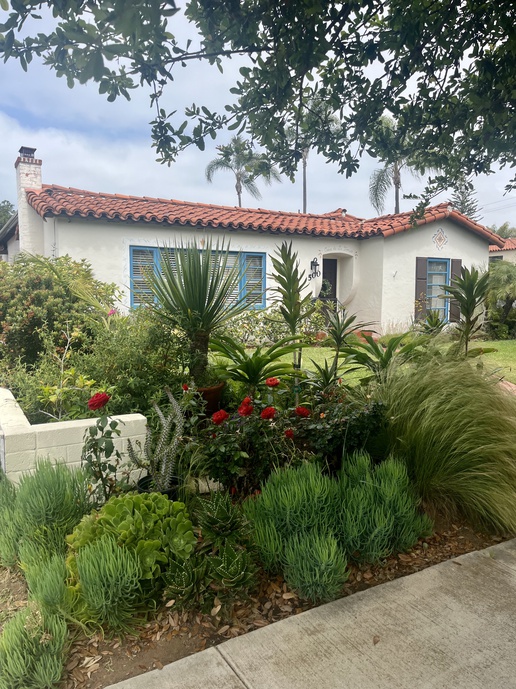 Built in 1937, 500 J Avenue is a Spanish Eclectic home built by well-known Coronado builder Walter Vestal. Walter Vestal is known as one of Coronado’s prolific builders and served as the Mayor of Coronado from 1954-1956 and 1964-1966. He also served on the Port Commission for ten years. Mr. Vestal was a 51-year resident of Coronado, a bridge advocate, and was active in the establishment of the Coronado Golf Course. The home at 500 J was purchased in 1943 by Mrs. Francis Mulcahy while her husband was deployed during World War II. Fanncis Patrick Mulcahy gave his wife a set budget but she went a little over the spending limit after falling in love with the home. Between his service in both WWI and WWII, Brigadier General Mulcahy received three Distinguished Service Medals and only saw the property after his WWII service ended.

The current homeowners, Rocky and Kathleen Spane, purchased the property in 2008 from the Mulcahy family. They noted that other than a simple kitchen update, the house remained largely untouched from its original 1937 design. Despite the age of the house, it was in great condition, with little to no dry rot or pest damage. Wanting to honor the history but update the home to fit the lifestyle of a modern family, the homeowners underwent a major restoration and renovation, Rocky taking on the project himself as the builder.

The historic elements of the house that were preserved throughout the project included the original floors, original doors after being refinished, and the historic windows that face the street. Details such as doorknobs, hinge hardware, and the doorbell and chimes also remain original. The three historic rooms in the front retain their original plaster walls, ceiling, and arch. When trying to match the historic flooring with the new areas, the company used reclaimed wood from another historic home in Coronado. 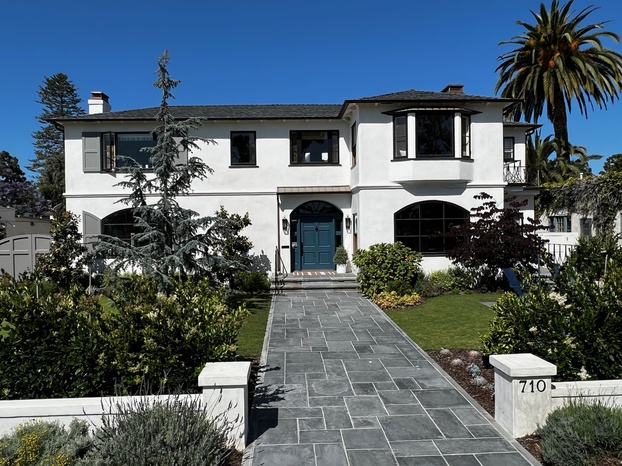 Walter Vestal was also the designer and builder of the home at 710 Glorietta Blvd, built in 1940. The original owners were Commander and Mrs. Franklin P. Conger. The home was built for their small family plus a live-in maid, as evidenced by a side entry.

The Congers were followed by a series of homeowners connected to the military. In 1950s, it was the home of RADM Frederick Stelter Jr., who was Commander Amphibious Training Command and later served as Commander of Amphibious Group One. No strangers to owning a historic home, the current homeowners Chris and Sarah Herr purchased the property in 2018, moving from a home with a Mills Act contract in North Park. The homeowners worked with Tonz Construction and consulted with Kellie McCormick to complete the project. Though the house is not yet historically designated, the current owners hope to get it recognized soon and hope to attain the Mills Act as well. With that in mind, they kept the strict restoration guidelines for Mills Act in mind.

On the exterior, the Herrs refreshed the original white stucco, rebuilt the front windows with period-appropriate materials, and kept and refinished the front door. Historic ornamental ironwork on the railings on the second-story balcony and porch were preserved and the ironwork detailing was pulled into other areas of the house. Reflecting on their favorite part of the house, Sarah noted how bright and sunny the rooms are with all the windows and the spectacular view of the golf course and bridge.

Congratulations to all the nominees for Going the Extra Mile! CHA is honored to recognize the homeowners that contribute to the preservation of the historic fabric of our community by “Going the Extra Mile” to restore these GEMs.