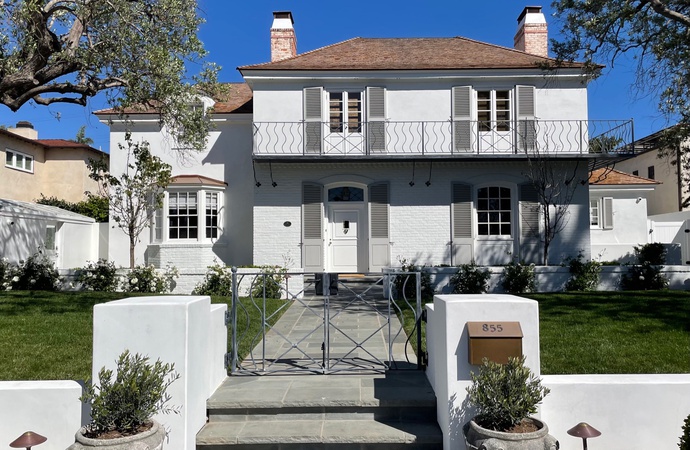 This GEM Award nominee located at 855 Alameda Boulevard, is a lovely example of the French Eclectic style and was built in 1936, and designated a Historic Resource in 2015.

Architects of Hurlburt, Frank, and Slaughter designed the home for Margaret and Tom Keck. In 1937 the Kecks welcomed their son, Tom Jr.  The younger Tom discovered his love of the ocean and went on to become an accomplished surf photographer, documenting the sport from the late 1950s to the present. Tom is an International Surfing Hall of Fame member and an inaugural member of San Diego’s Surfer Hall of Fame.  The Kecks lived in the home until 1946, during which time Mrs. Peggy Keck (later Clarkson,) was very active in the Coronado American Women's Voluntary Services during WWII. 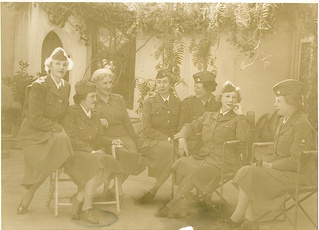 Mrs. Keck is pictured here at the far left. Photo from the Coronado Historical Association’s Collection. 1900.17.01-07

Another prominent former resident, Lieutenant Samuel C. Jackson, USNR, was awarded the Air Medal in 1945 for aerial heroism in “saving his Carrier Task Force from possible damage by shooting down a Japanese bomber which had sneaked out of cloud cover for an attack on the American ships.”  Minnie Walbridge purchased the home from the Keck family in 1946.  After her passing, then Lt. Kenneth R. Wiley with his wife Nancy made it their home in 1964 along with their five children. Wiley’s Naval career was highlighted by serving as Air Boss aboard the USS Bon Homme Richard in 1966, berthed at North Island, and as Air Wing Chief of Staff in 1968 when he led the effort to develop the Air Combat Maneuvering training program (Top Gun). He retired as a Captain. In retirement, Wiley put his electrician skills to work and worked for Lorton Mitchell’s budding design and construction firm.

The current owners’ first home in Coronado was just steps away from the Pacific Ocean, on Sunset Park. As much as they enjoyed the seven years they lived in that home, they came to the realization that they would prefer a quieter setting with a larger lot. Wanting to remain along the coast, their search took them all the way to Santa Barbara, but they ended up finding their perfect home back in Coronado.

With the purchase of their first home in Coronado, the owners forged a lasting relationship with Flagg Coastal Homes and Flagship Properties. Although 855 Alameda Boulevard was set with a buyer and Flagg was already engaged in the renovations, circumstances changed and an unexpected opportunity for the current owners presented itself. When John O’Brien walked them through the property, the spacious lot, quieter neighborhood, historic bones of the house, and already approved historic renovation plans all came together to be almost the perfect fit. The last piece was Amy Meier Design to complete the team. In their previous home, Amy Meier designed a casita and the owners were beyond thrilled with her work. As for the interior design of 855 Alameda “Amy and her team are responsible for the clean, simple and overall calming interior,” the owner gratefully shared.

As to the build itself, the owner described the kitchen as “basically brand new from the dirt.” The addition of a vaulted ceiling pulls light and space into the kitchen. Flagg combined the original dining room and front office space to open up a large first-floor living area and the original narrow oak wood flooring was saved and lightened. A bathroom was added to the second-story master by enclosing the roof space over the first-floor back porch. In the large backyard courtyard, an outdoor room along the southside alley wall was also fully enclosed to become a guest house.

Venetian plaster walls throughout the upstairs and the narrow plank original oak wood flooring downstairs bring in an Art Deco quality reminiscent of the original 1930's era of the home. The clean lines of the façade of the home, including the meticulous restoration of all the original hardware of all the doors, windows, and shutters as well as the complete rebuild of the balcony on the façade as an exact replication.

The owner’s father was in the Navy and stationed in Coronado in the late fifties. When the family started coming to the Hotel del Coronado as a family every summer beginning in the early 70s, perhaps the seeds were planted for his ultimate return. The community of Coronado is grateful the owner and his wife returned to grow roots here and “Go the Extra Mile” to restore their beautiful historic home.