The History of Ocean Boulevard’s Seawall 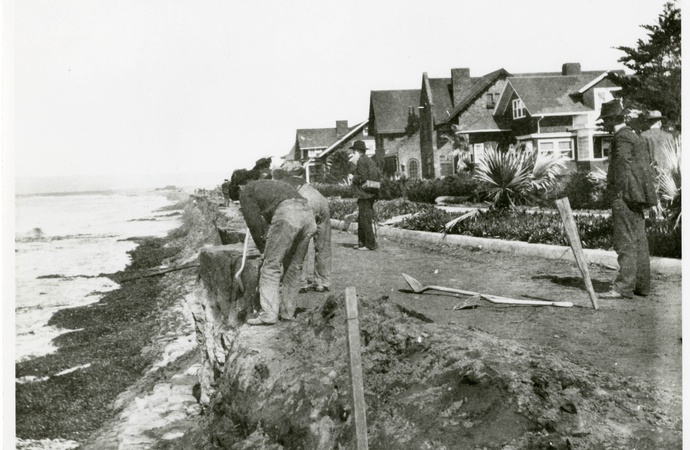 Above: Men inspect the damage done to the Boulevard after much of it was washed away. 1905.

Rocks will Barricade a Repeat of History:

The recent damage to the Ocean Beach Pier caused by the high surf in San Diego brings to mind many of the photos in the Coronado Historical Association’s collection from over 100 years ago of a storm so strong that Ocean Boulevard itself was washed into the ocean. It was this storm that was the impetus for the addition of one of our most historically valuable and significant additions to our community’s environment, the rocks along Ocean Boulevard.

Every community, particularly one as unique and beautiful as ours, carries within itself special reminders of the past. Not just architecture. There are pieces of history that tell stories of who we were and how we lived as we move forward into our future. One of these monuments from long ago that create the historic fabric and ambiance of our town are the rocks that line the shore of Ocean Boulevard. These great pieces of stone in many ways reflect Coronado itself, as a steadfast community.

At the turn of the 20th century, Ocean Boulevard didn’t have much in the way of a beach. A sheer cliff cut down to the water in high tide. 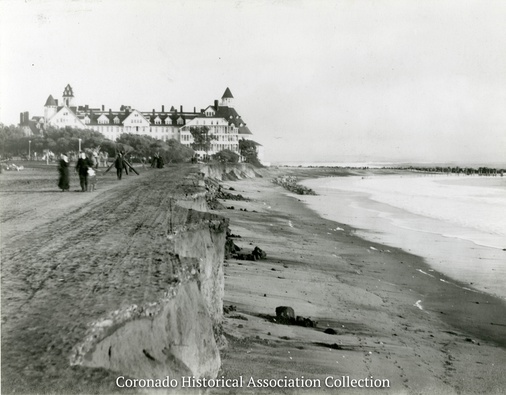 A small sliver of a beach was enjoyed only at low tide. In fact, so few photos exist of this area prior to 1900 because bathers were more often found in the area just south of the Hotel del, along the site of Tent City and down theSilver Strand. Still, great homes were constructed along the Boulevard overlooking the Pacific, for the location was too enticing to ignore.

The downside to living on paradise’s doorstep came on January 4 and February 18, 1905, when severe storms struck, doing great damage to both the north and south of the Hotel del Coronado. Winds and ocean waves played havoc with Ocean Boulevard, beating it with such tremendous force that the entire street was undermined. The damage was much more severe than the recent damage to the Ocean Beach Pier this month. 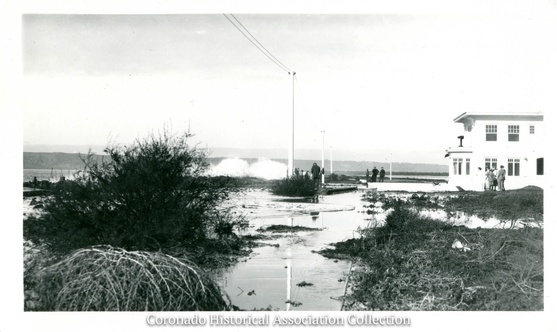 Water floods the road and property around 535 Ocean Blvd after the storm. 1905. 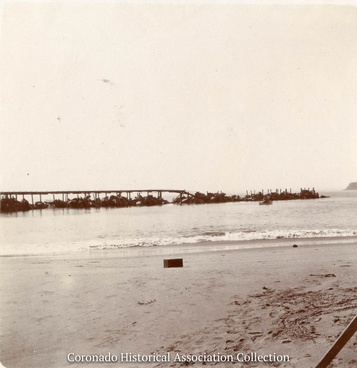 Between storms, residents oversaw the placement of thirty thousand sandbags to prevent flooding into their homes. Each bag weighed around 200 pounds. However, this barrier proved ineffective. March storms continued to cause serious wave erosion; ultimately 110 feet of land was removed along Ocean Boulevard. The street itself washed away. The grand dream seemed to be gone. Two large residences on the Boulevard were moved “inland” by their distraught owners. A pier in front of the Hotel del Coronado was destroyed. 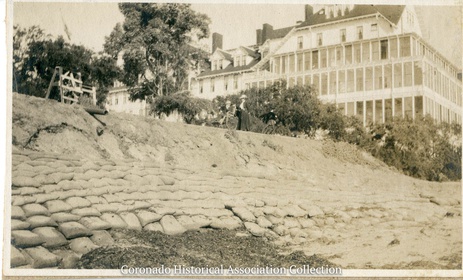 By 1906, the community had come together to construct a rock wall along Ocean Boulevard. A long-lasting rock seawall was the solution to preventing water intrusion and soil erosion, much like sand dunes or other natural barriers along the coast. The rocks would help protect property by protecting inland areas by withstanding destructive winds and waves, and in some cases, redirecting them. Residents voted on a bond issue of $145,000 to finance the seawall project. Over the next year, over sixty seven thousand tons of rocks came from the nearby Sweetwater Valley, and were transported to Coronado via the Belt Line Railroad Train along the Silver Strand. Special tracks were then laid down the Boulevard and the rocks rolled into place by hand and crane. 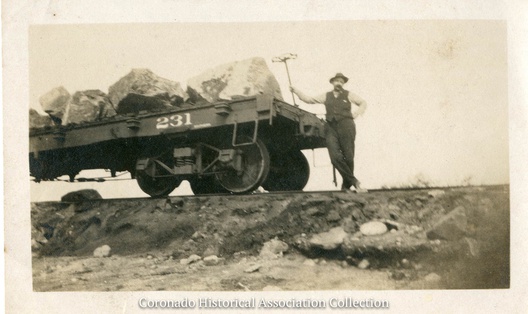 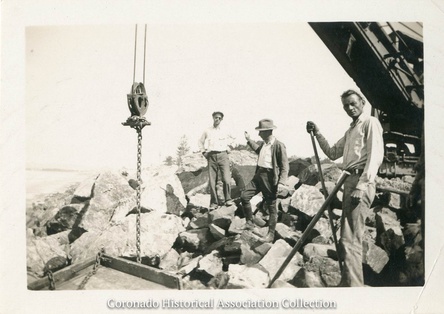 The wall stretched from the hotel to the north end of the peninsula and began a protection that still lasts to this day. Slowly the sand would build up in front of them, and today, with the aid of much dredging and depositing throughout the years, the rocks face one of California’s most beautiful beaches. 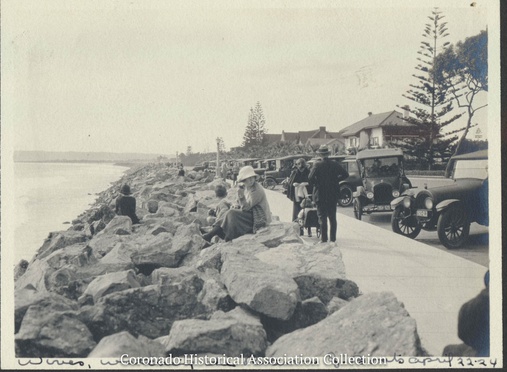 Over the years improvements have been made to the wall such as in 1914 when the City spent $3,300 on improvements. Fortunately, the City Trustees had created a “Seawall Fund,” which came from a levy of 10 cents on each $100 of property valuation, making possible any annually-needed repairs.

An addition of sorts was made to the rock wall in the 1920s when Coronado sought to establish an ocean landing Naval base along the shore. The location was advantageous because large battleships could anchor more easily in this location rather than at North Island. In 1924, the community quickly mobilized to approve funding and construction of a curved rock wall off of the Hotel del Coronado to create a harborette. The cities of San Diego and Coronado split the $150,000 cost to construct a C-shaped rock wall into the ocean. Coronado residents grew excited by this new economic prospect and geared up for an increase in land value as well as the construction of some 750 new homes for navy sailors. However, funding from San Diego soon fell short. In the early winter months of 1926, three storms hit Coronado beach and damaged the still unfinished harbor wall — the cost of the project’s completion increased by $50,000. San Diego ignored calls for more funding to finish the wall, and by 1926, the Coronado community ceased work on the rock wall extension. Today, sections of the abandoned C-shaped wall can be seen off the beach by the Hotel del Coronado. 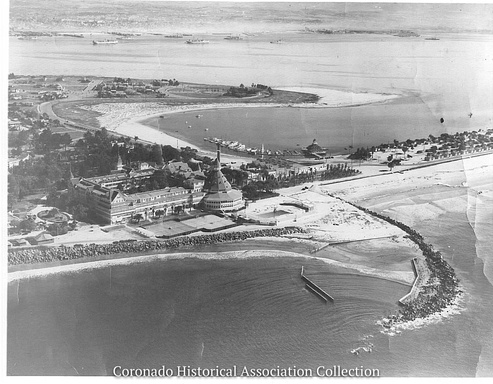 Additional storms have battered Ocean Boulevard but none produced as devastating effects as the 1905 storm, thanks to the seawall. In one instance in 1915, waves broke over the seawall and vast quantities of water ran down the new Ocean Boulevard pavement. George Sturges captured three big lobsters on his property and numerous fish. Pat Ingle Dowden remembered lobsters clinging to bushes in the gardens. All the spectators agreed, nonetheless, that the seawall had done an excellent job protecting Boulevard property. 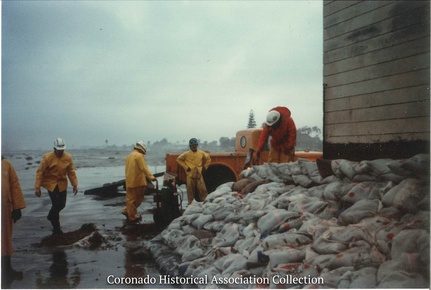 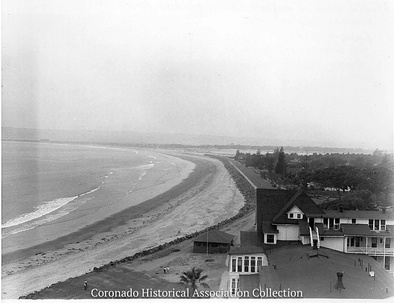 A view down the seawall from the Hotel del Coronado turret. Date Unknown.

The Coronado Historical Association’s mission is to be the primary center for education and stewardship of Coronado’s history. CHA’s collections include over 40,000 photographs, including many that are a reminder of why the rocks on Ocean Boulevard are historically and functionally valuable assets that create the historic ambiance of the community that we love today. To learn more about Coronado’s history, including the history of the Ocean Boulevard rocks, visit www.coronadohistory.org, email cstokes@coronadohistory, or call 619-435-7242. Excerpts and narrative from Gerry MacCartee, Coronado: The Enchanted Island (4th Edition), and the article “The Seawall” by Paloma Ronis von Helms, CHA Coronado High School Intern Spring 2020.