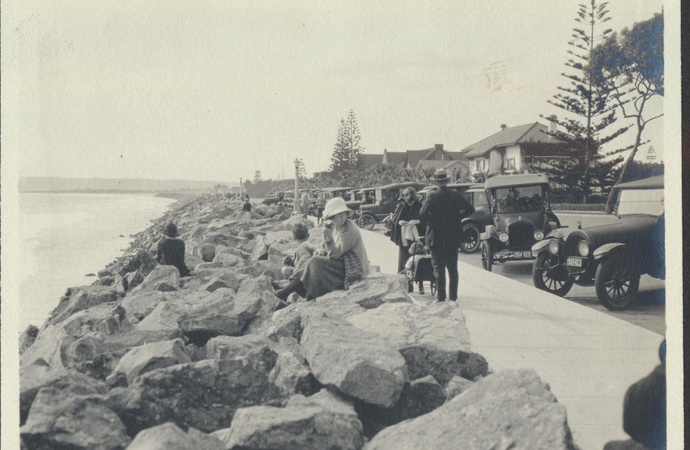 The Coronado Sea Wall is composed of a series of large rocks and boulders lining Coronado’s shore. It can be seen extending from North Beach past the Hotel Del Coronado and morphing into the seawall in front of the Coronado Shores buildings.

Beginning in the 1890s, residents along Coronado’s beach recognized the need for some sort of protection against the ocean tides. They began by placing a series of thirty thousand sandbags at the base of the beach to prevent flooding into their homes. Each bag weighed around 200 pounds. However, this barrier proved ineffective in the early 1900s. A sizable storm crashed into shore in March of 1905, sending large waves and high tides onto the island. Many ocean-front houses were damaged along Ocean Boulevard, and the powerful waves ate away at parts of the road. Additionally, a pier in front of the Hotel del Coronado, which no longer stands today, was destroyed in this very storm.

In the wake of this catastrophe, it became clear that the sandbags, while numerous, were inadequate in guarding property from such formidable Pacific storms. By 1906, the community had come together to construct a wall of rocks along Ocean Boulevard, and residents of this neighborhood purchased $145,000 worth of rock for this project. These rocks came from Sweetwater Valley, and were transported to Coronado along the Belt Line Railroad Train by way of the Silver Strand.

An addition of sorts was made to the rock wall in the 1920s, when Coronado sought to set up an ocean landing base along their beach for the U.S. Navy. This location for a landing base was advantageous because large battleships which had trouble passing through the bay could anchor in this location rather than off of North Island. In September of 1924, the community quickly mobilized to approve funding and construction of a curved rock wall off of the Hotel del Coronado to create a C-shaped “harborette” for fleets to land safely. The cities of San Diego and Coronado split the $150,000 cost to construct this rock wall into the Ocean. In 1925, a fleet landed in the harborette while it was still partially under construction. Coronado residents grew excited by this new economic prospect and geared up for an increase in land value as well as the construction of some 750 new homes for navy sailors. The Hotel del Coronado even planned to host yachting events that would touch off from the harborette.

However, funding from San Diego soon fell short. In the early winter months of 1926, three storms hit Coronado beach and damaged the already unfinished harbor wall, and the cost of completion on the project increased by $50,000. San Diego ignored calls for more funding to finish the wall, and by 1926, the Coronado community had moved on from attempting to continue work on the rock wall and harborette. Ultimately, the vision of a bustling naval mini-harbor never came to fruition. However, parts of the C-shaped wall can be seen off the beach by the Hotel del Coronado.

Today, Coronado’s seawall continues to protect island homes along Ocean Boulevard as well as the stunning boardwalk, which visitors and residents alike can enjoy.